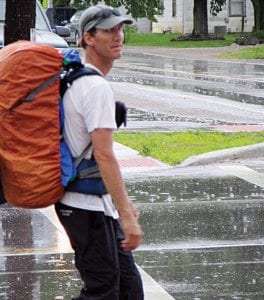 Stephen Horn of Colorado made it to Kirkersville Tuesday on his some 1,500 mile walk from the Colorado Statehouse in Denver to the U. S. Capitol in Washington, D.C. He left Denver on April 2 to show his support for our troops, to “light a spark” under non-voters and to encourage voters to at least consider independent candidates. He followed U.S. 36 from Denver to Indianapolis and picked up U.S. 40 there. Horn, 45, will take U.S. 40 to its beginning in Cumberland, Maryland, then walk the C& O Canal bikepath to the Capitol. He often camps out next to churches or sleeps in dugouts in parks. He’s meet hundreds of kind strangers, the latest is Judy Casto at the Kirkersville Carryout. He was looking forward to a dry bed at the Rodeway Inn on Keller Road before heading to Zanesville on Wednesday. His pack weighs about 30 pounds. Beacon photo by Charles Prince.