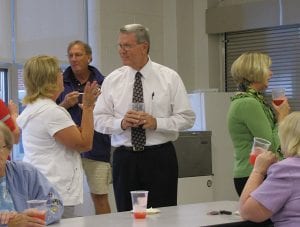 Walnut Township Local Schools Superintendent Ron Thornton, center, talks with a well-wisher at his retirement reception on Sept. 23. He came to Walnut Township in April 2007 on a threemonth interim basis to replace Ed Abram who retired at the end of March. That initial three months turned into four and a half years. Thornton came to Walnut Township from Teays Valley Local School District where he served as superintendent for 17 years. His accomplishments include the sale of $3 million in Certificate of Participation bonds that are repaid out of operating funds rather than by asking voters to approve additional taxes. The bond proceeds were used to replace the roofs on both schools, upgrade both HVAC systems, pave the high school parking lots and make other facility improvements. The crown jewel was the realization of a 20-some year dream for an all-weather track, allowing the school to host track meets. Stadium lighting and bleachers were upgraded as part of the track project. Thornton also cut administrative costs by first sharing district treasurer Kirk Grandy with Berne Union Schools and then becoming the shared superintendent last spring. Grandy will continued to be shared with Berne Union and Thornton’s replacement, Dale Dickson, will work for both districts. Thornton is moving to North Carolina so he and his wife can care for her parents. Beacon photo by Charles Prince.