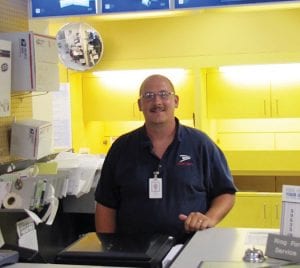 Buckeye Lake has a new postmaster. Brad Cass of Thornville started August 15, replacing Chris Johnson who retired August 1. Like Johnson, Cass is a former budget analyst in the Columbus district office. The Columbus district office was recently closed. Cass also has experience as a postmaster, serving in Crooksville and Thornville. As the US Postal Service continues to cut expenses as mail volume falls, it appears that he will be the only employee in the Buckeye Lake Post Office. Part-time Buckeye Lake worker Molly Ewing, who leaves for retirement on August 18, typically put the mail in the boxes. Her retirement now means mail won’t be done for customers until 11 a.m. rather than the previous 9 a.m. Beacon photo by Charles Prince.