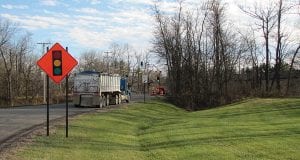 LIEB’S ISLAND – ODNR may have to add the substantial repair or replacement of most of Liebs Island Drive to the scope of its Buckeye Lake Dam replacement project.

ODNR and local officials recently noted that the southern or in-bound lane along the Feeder Creek was starting to deteriorate with fatigue and longitudinal cracking, and rutting. The deterioration was likely accelerated by the heavy equipment brought in to build the construction staging area and start the stability berm.

Traffic was moved off the southern lane Tuesday as trucks began delivering material for the 30-foot wide stability berm. Thousands of truckloads will be required. The material is currently being stockpiled on the eastern end of the now closed boat ramp parking lot. The now one-way traffic is controlled by two portable traffic lights.

Though Liebs Island Drive is marked as a township road, Walnut Township Trustee President Bill Yates said it is unclear whether the road belongs to Fairfield County or the township. Consequently, both are party to a Roadway Use, Repair and Maintenance Agreement with ODNR. The agreement includes a $1.6 million bond posted by ODNR’s Construction Manager at Risk. The agreement also covers special hauling permits that will be required for overweight or oversized loads. The agreement also waives seasonal reductions in legal weight limits. In return, ODNR has the responsibility to return any county or township road used in the dam’s replacement to be returned to its condition before work started. 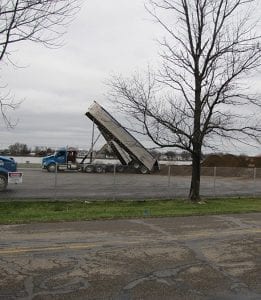 All construction activity including truck traffic will significantly increase by the end of the week, according to Ian Nickey of Hicks Partners. 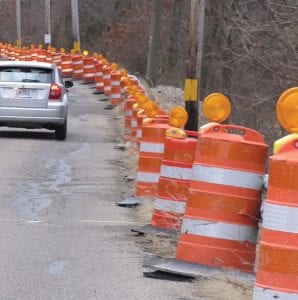 Nickey said installation of the five-foot high chain link fence will proceed the construction of the stability berm. He confirmed that the fence will be the design developed with Millersport Fire Chief Bob Price to allow easy access for first responders.