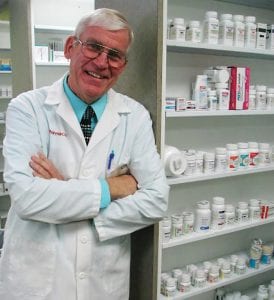 HEBRON – Pharmacist Bruce Kolbe is a familiar face to many Hebron area residents.

Kolbe, who staffs the new Arensberg Pharmacy in the Village Shopping Center in Hebron, owned and operated the Hebron Pharmacy in close to the same location from 1975 to 2000.

“I am thrilled, elated, to be back here,” Kolbe said. “The people here are fabulous. I know I can take care of people in any way they need, that we’ll have that kind of continuity with me here every day.”

Kolbe has spent the last decade working for large chain pharmacies, being plugged in regularly at different stores as far away as Mount Gilead, Mansfield, Mount Vernon, Zanesville and New Lexington. Continuity wasn’t part of that arrangement, he said.

Arensberg Pharmacy is an Ohio-owned company that got its start in 1920, a small chain with 25 stores. Four of those stores are in nearby Newark. Kolbe will staff the Hebron location Monday through Friday 9 a.m. to 6 p.m. and Saturdays from 9 a.m. to 1 p.m.

“We emphatically tell everyone that this is still the hometown pharmacy, because it is,” Kolbe said. “We know you by your first name and we know where your kids go to college …. Krogers is a massive operation, and a good operation. We don’t compete with them. There’s no assembly line here. The difference is, here, you get us.”

“Us” is not only Kolbe, but also local resident and pharmacy technician Sandy McClain, who first worked for Kolbe at the Hebron Pharmacy when she was 16 years old. She worked there nearly 20 years, and Kolbe said he appreciates that kind of loyalty and support. “I’m so happy to have her back, because she’s someone I trust,” he said.

The recent opening of Arensberg has been a walk down memory lane in other ways for Kolbe, as well. Grown customers come in to pick up prescriptions for their families and talk about running into his old store for candy when they were little.

“A lot of people recognize and remember me. This isn’t my hometown,” noted Kolbe, who originally purchased pharmacies in both Hebron and Millersport after graduating from college and working in Cambridge, “but to know the person walking through that door is just remarkable. I love it.”

In his decades as a pharmacist, Kolbe said he’s seen the world of medicine go through radical changes, from the advancements of new drugs to a drastic change in costs and insurance company procedures. “I remember when it was unusual for a prescription to cost more than $10,” he recalls. “Now, it can cost $1,700.”

Customers can pull up to the door at Arensburg and be in and out in five minutes, Kolbe said. That’s the store’s goal. Inventory includes over-the-counter basics, as well, which will be adjusted as the Hebron location gets a sense of what customers want to be able to buy there.

“We have everything anyone else has, in terms of pharmaceuticals,” he said, “and we’ll tweak that, too, as we learn exactly what medicine Mrs. Smith needs every month. We’re very competitive, price-wise. If a call needs to be made to your doctor, we’ll do that. It’s just what you can expect from us.”