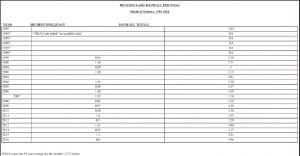 Thank you for your email of Oct.5, 2017. Pardon my delay in responding; I needed to get some information from NOAA, but their web-site was down for several days, I presume for annual maintainence: I then was ill for several days.

To begin, let me be blunt- I don’t believe that most of the points I raised in my letter to Senator Hottinger were addressed; indeed, your post is essentially a regurgitation of Ian Nickey’s original post. Repeating what has been stated is not an answer- the point about ‘this has been the practice’ (re: draw down date of October 1) did not address the points that the original ‘line’ about that the draw down was ‘to aid construction’ that never took place. In theory, one could contend that the earlier date the 1st year could make sense, due to the dam weaknesses. However, with a 2’ thick concrete wall and 43’ of riprap, this is no longer valid. The idea of an overtopping event (which has never occured here, even before the new construction), particularly in October, would be laughable but for the harm to our businesses, and lost lake use time to residents and visitors.

You referenced that over the last 24 years, the lake reached elevations that would cause the spillway to function as designed * on “over 12 occasions”. I fail to find any such indicators in computer searches of ODNR sites, and, indeed, the internet as a whole. What I did find out from NOAA (yearly listing attached), that showed since 1993, not on ONE SINGLE DAY was more than 1.83 inches of rain received; indeed, the highest total for October was 2006, when 4.59 “ was received FOR THE ENTIRE MONTH. Given that we just had a 6.5” rainfall here (9.2” on a gauge in Millersport) in one day, and everything held, your point is ludicrus. The highest single day total for rain in October since 1993 was over a single inch on only 7 occasions ; NOAA listed the 55 year average for October as 2.70 inches FOR THE MONTH.

Other points not mentioned in your note include that actions by the ODNR dam tender are without notice, review, or question. In an emergency situation, that could make sense , but not day to day; it appears that ODNR has forgotten who they serve: the public, not a private, secret agenda.

Also not addressed, the radical, extremely low level for the “new” ‘winter pool’; all that I ever heard was the inane “overtopping” line, plus the absurd contention that previous ODNR employees had ‘gotten it wrong’ for every year until this project began, an absolutely false, scurrilous accusation without any basis in fact.

Also, the issue of the North Bank docks having to pivot (to let boats by to inspect the dam), has been made even more ridiculous by ODNR’s decision to keep most of the rip-rap. HOW can one “inspect” a dam through dozens of feet of rip-rap?

Next, the issue of Mr. Nickey’s statement that the lake would be “permanently lowered” and “used for flood control”. As ODNR’s own current page about Buckeye Lake states: “ Buckeye Lake continues to support recreational uses such as fishing and boating and is NOT ESTABLISHED FOR FLOOD CONTROL.”.

So which is right?

Finally, the massive problem we have with the secrecy of ODNR about this project. As I stated to Senator Hottinger, ODNR promised meetings with homeowners and other stakeholders before construction was to begin. Since then, we have been “mushroomed”, from our elected officials being locked out of meetings, bad faith responses to Open Records requests from The Beacon and others, to the ridiculous: denying a Buckeye Lake Councilman’s request to see Phase 2 plans as “you might be with Al Queda”.

We have the legitimate interest, indeed the right, to be involved in this as it directly affects our lives.

Should you have any questions, or need citations regarding any of the points that I have made above, feel free to contact me.

* After the initial portion of the spillway was built, the state promised to return the following year to attach an 18” cap, which never took place.