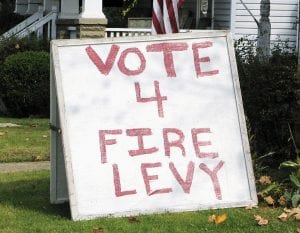 NEW LEXINGTON- No fingernails were bitten in the race for Thornville Mayor as incumbent Beth Patrick defeated challenger Richard T. Daniels 222 votes to 39, according to unofficialresults from the Perry County Board of Elections. Patrick, while pleased with the victory, said she’s actually happier about passage of a Thornville one-half mill parks and recreation replacement levy, which passed 145 votes to 120. “I’m just glad about the levy,” she said. “I was more excited about that.” To her, passage of the levy shows that residents have more faith in the village, which endured a couple tumultuous years as it struggled to free itself from an overwhelming debt. “It’s been a while since a levy’s passed,” she said.

• Northern Local School Board candidates Dale DeRolph, who earned 1430 votes and Nancy Fox, who earned 1375 votes, will filltwo openings on the board, while candidate Patrick Hogan was defeated with 783 votes.

• The Village of Somerset four-mills police replacement levy passed 198 to 83.