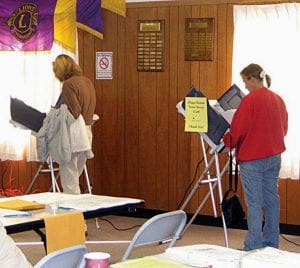 Counting non-electronic ballots lasted past midnight; board of elections workers said many of the ballots were completed with a check mark instead of a correctly filled in space next to the candidate’s name or issue per the directions. Correcting the ballots was a lengthy process.

But, the wait will be even longer for Perry County Commissioner candidates Fred Shriner and Charles Van Horn, whose race will likely be decided next week when 332 provisional ballots not included in Tuesday night’s unofficial results are counted. According to the unofficial results, Republican Shriner leads Democrat Van Horn 7,136 votes to 7,104 – a difference of 32 votes.

“I’m going to be on pins and needles for the next 10 days,” said Shriner, the incumbent. “I said all along I’d do it,” he said. Although he feels confident, he acknowledged the race isn’t over until it’s over.

Republican Sheriff William Barker clearly won a fourth term, defeating Democrat challenger Amy Nash English 8,120 votes to 6,728. In a prepared statement, Barker said, “I have so much to be grateful for. I have a wife of 31 years of marriage and a son and his family, all of good health. My mother and father are still living, many family members still living, and a God who loves me. My inlaws are all doing fine and I have many friends and supporters to be thankful for. I have a home, a 30- year career I’m very proud of, and I am still able to ride my Harley or climb a tree, waiting on a big old buck to cruise by. I live in a country and a county I love serving. Who could ask for more?” He had no further comment.