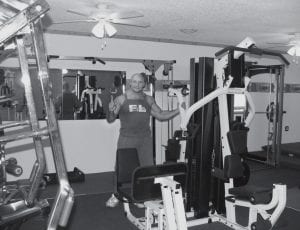 Tom Gill, pastor of The Gathering, is promoting physical and spiritual health at The Home Gym, which opens Oct. 8. Beacon photo by Scott Rawdon.

FAIRFIELD BEACH- Bring your energy, faith, and enthusiasm, but please leave the Spandex at home.

Tom Gill, pastor of Fairfield Beach’s non-denominational church called The Gathering, opened a public gym, called The Home Gym, on The Gathering’s campus. “It’s a place to get into shape, not to show off,” he said. Skin-tight and revealing athletic outfits,as well as vulgar language, are discouraged, but positive attitudes and the desire to become healthy in mind and spirit are welcome.

Three weeks ago, Gill, a physical fitness expert who’s spent more than 30 years in training and training others, had a vision for combining his athletic experience with his life as a pastor. Having a gym on premises would promote physical and spiritual health. “I’ll let my lifestyle be the message,” he said. “I won’t preach in the gym, but if you ask…” It took Gill less than a month to convert a spartan building into a fully functional gymnasium complete with Nautilus-type strength and cardio training equipment, and lockers. “It’s a modest place,” he said. “It’s get in and get out.” Gill explained that it’s not a gym where people hang out and socialize, or is it a place where people “throw weights around,” and yell and growl as they lift. It’s a place to take getting into shape seriously. He hopes all his patrons take the time to learn how to exercise smoothly and correctly. An effective workout, he said, should take under an hour, not that he’s timing anyone.

When Gill initially had the idea for the gym, he knew he was on the right track when another pastor donated some strength training equipment to Gill’s cause. “God spoke to me about this,” he said. The equipment just needed some elbow grease to look like new. With the addition of a few more pieces of equipment, it was only a matter of days before the gym, which officially opens Oct. 8, was fully outfitted.

Throughout his life, Gill has trained everyone from models to athletes, and everyone in between. And he’s trained people in all corners of the United States. He attributes his success as a physical trainer to those who trained him. “I’ve had some great trainers,” he said. Gill hopes to pass along his experience to his patrons.

He’s willing to train people on a one-on-one basis or couples, but he doesn’t believe that master classes – training three or more trainees at a time on the machines and weights within the gym – are effective. But, he plans to launch “boot camp” for groups, which is a three times per week for six weeks training session featuring, just as the name implies, intense exercise for those who are very serious about getting into shape.

Gill assures that the gym will always be supervised in some manner during operating hours, which are 5 a.m. to 9 p.m., but he requires that members are at least 15 years old. The gym has a keycard entry system for security.

At 45 years old, Gill said that he’s enjoying exercising and training more than he ever has; no one is old enough to neglect his or her own health. “It’s not how you start the race, it’s how you finish it,” he said. Even if a person has never been in shape, today’s a good day to start. “Wrinkles are the stories of life. We shouldn’t fear age.”

Gill wants about 100 members and to personally train no more than 10. He’s already getting calls. “It’s just about working the body,” he said. “That’s pretty simple.”