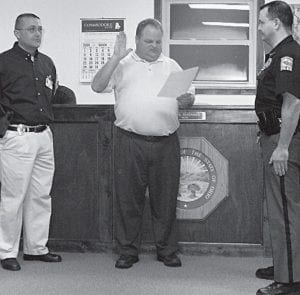 Millersport Police Chief Randall Lewis, left, looks on as Mayor Dean Severance swears in part-time paid Police Officer Mark Consolo. He had previously been an unpaid reserve officer. Consolo will be paid $10 per hour for up to 24 hours per week. His addition gives the village two parttime paid officers plus the full-time chief. Courtesy photo.

“I’m sure there are going to be some complaints, but it is a hazard,” Council President Dave Levacy said.. Fire Chief and substitute school bus driver Bill Yates said if vehicles are parked on the east side, large vehicles- like school buses and fire trucks- are forced to cross the center line to clear the parked vehicle. Others mentioned the difficulty of seeing oncoming traffic when using Main Street to exit the parking lots behind the elementary school.

Council members suspended the three reading rule so the ordinance will be effect immediately. The Ohio Department of Transportation will be providing the new signs so it will be weeks before signs are in place. Once signs are up, it is expected that violators will initially receive warnings rather than tickets.

Newly appointed council member Shane Wise suggested limiting the ban to Monday through Friday when school is in session to provide additional space for weekend parking in downtown. Residents in that area have parking behind their homes.

In other business Tuesday night, council members unanimously approved a new agreement with Time Warner that includes a 3 percent video service fee. State legislation recently eliminated the previous franchise fee, but created the opportunity for the new video service fee. The previous 3 percent franchise fee generates about $4,000 a year for the village. Though the new fee could be set as high as five percent, council members didn’t want to increase it since it would likely be passed onto local customers. Mayor Dean Severance will discuss the possibility of no cost or lower cost broadband service for the fire department, new water treatment plant and village hall with Time Warner.

Severance complimented his assistant, Vince Popo, for his efforts in getting $18,128 or 75 percent of the village’s expenses from the September windstorm reimbursed by FEMA. “Vince went after that money,” Severance said. He also noted that Walnut Township didn’t get anything. “The township has chastised our fire department many times for fiscal irresponsibility, yet they failed to apply for FEMA funds,” he added.

Popo told council members that he had written the regional post office operations manager asking that the current officerin charge of the Millersport Post Office be made permanent postmaster. He noted that Leanne Thiel is a village resident and understands the concerns village officials have about postal service. Several council members said Thiel has made a big difference since she arrived.