ODNR will pull the lake plug on October 1

BUCKEYE LAKE – In spite of some well-reasoned pleas to maintain the interim summer pool into November, ODNR will pull the plug on Monday, October 1.

“To protect the public and the significant investment made as part of the Buckeye Lake Dam project, ODNR will continue the practice of aggressive and proactive water control management until the project is complete. As has been the case since interim summer pool was established in 2016, ODNR will again begin drawing down the lake to winter pool beginning October 1.

The drawdown to reach winter pool is expected to take approximately four (4) weeks and will be complete by the end of October, depending on weather, rainfall and other conditions. The stop-logs will be put back in place on March 1, 2019 and the lake will be allowed to refill to summer pool.

In the last 24 years, the lake elevation reached a height over the Sellers Point Spillway (an elevation which would inundate parts of the work area and approach the top of the Embankment Stability Berm) more than 12 times during the winter pool period (October-February), including incidents in October and November. To decrease this risk, it is necessary to begin removing the stop-logs on October 1 and allow the lake elevation to go down to winter pool, which is 2 feet below the interim summer pool level.

The lower pool level increases the capacity of the lake to safely impound storm water during a high-water event and prevents the lake from overfilling, possibly overtopping the dam. In addition to dam safety concerns, there are project concerns. Should overtopping occur, newly placed topsoil could be washed away, which would jeopardize the project’s completion schedule at a significant cost to Ohio taxpayers.

It is important to remember that the three threats being addressed as part of the Buckeye Lake Dam Rehabilitation project are seepage, stability and overtopping. The completed stability berm, cutoff wall and buttress elements are important steps to address seepage through and under the dam as well as stability. The concrete cap, and the asphalt paving top, along with topsoil and turf grass are critical to address the issue of overtopping. Despite significant progress, these elements remain unfinished. Thus, the dam is still vulnerable during overtopping.

The drawdown schedule was adopted as an interim risk reduction measure on the advice of the project engineer to safeguard the public while construction is underway.

The Buckeye Lake Dam project is scheduled to be completed by the end of the year with normal dam operations resuming for the 2019 recreation season.”

The Beacon was expecting that the September 22 Update would include the new dock standards for dam front properties. ODNR dam spokesperson Heidi Hetzel-Evans responded to our inquiry about the status of the dock standards on September 27. She wrote, “We hope to have the new dock policy out in the next few weeks. We will be distributing it via email and the Web site.”

It’s difficult to understand the continued delay in releasing the new dock standards. The dock design has obviously been know for months as custom concrete dock anchors have been designed, constructed, delivered and in many areas already installed. Pushing the release date well into October means that a considerable number of dam front residents will have already left for warmer climes, making it even more difficult for them to arrange construction of a new dock. The late date also shortens the construction window for even year-round residents, making it likely that many will not have a new dock well into next year’s boating season if at all. 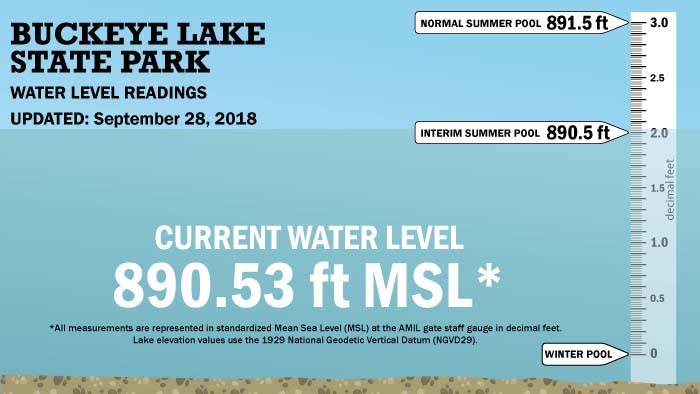 Thanks to steady rains earlier this week, ODNR’s draw-down will at least begin at the interim summer pool.