(Editor’s Note: This is a press release from the Ohio Department of Natural Resources)

ORLANDO, Fla. – The Ohio Department of Natural Resources (ODNR) was awarded the Association of State Dam Safety Officials’ (ASDSO) 2019 National Rehabilitation Project of the Year Award today for Buckeye Lake Dam. The project was finished in November 2018—two years earlier than initially expected and more than $40 million under budget.
“Today, Buckeye Lake Dam meets modern safety standards and ensures that the community and visitors will continue enjoying exceptional recreation opportunities far into the future,” said ODNR Director Mary Mertz. “This remarkable achievement is a credit to the professionalism and determination of ODNR’s project staff and our public and private partners.”
Presented at the ASDSO Dam Safety conference, the award recognizes a unique remedial design that advances the state-of-the-art in the field of dam safety and exemplifies the professional engineering and construction standards that dam safety requires. ODNR’s partners Gannett Fleming Inc., Michael Baker International, and ASI Construction were also included in the award.
“The rehabilitation of Buckeye Lake Dam exemplifies the professional engineering and construction standards that dam safety requires. Prior to the completion of this project, the dam created an unacceptable risk to people, not only with their homes constructed into the downstream side of the dam, but homes, businesses, and roadways further downstream,” said ASDSO President Roger Adams, P.E. “This project was selected as the ASDSO National Rehabilitation Project of the Year among many excellent nominees because the project addressed unusual deficiencies with the dam, pioneered a new standard for dam rehabilitations and also reduced the original estimated time of construction and overall project cost.”
In 2015, the U.S. Army Corps of Engineers (USACE) determined the nearly 200-year-old earthen dam at Buckeye Lake to be at risk for catastrophic failure, posing significant risk to the public. ODNR worked quickly to secure the funding and permits so work could begin to replace the aging and decaying dam. The project team used a method of dam construction known as ‘soil mixing’ to create barriers underground to prevent seepage and potential dam failure and enable faster construction.
In addition to its modern safety features, the new dam at Buckeye Lake State Park provides visitors with a new access path for jogging, biking, and walking that extends the entire length of the 4.1-mile structure.
ODNR owns and operates 116 Class I, II, and III dams around Ohio and is responsible for inspecting and regulating more than 1,500 public and privately-owned dams statewide. ODNR’s mission is to ensure that dam systems are properly maintained and operated for the public’s safety. 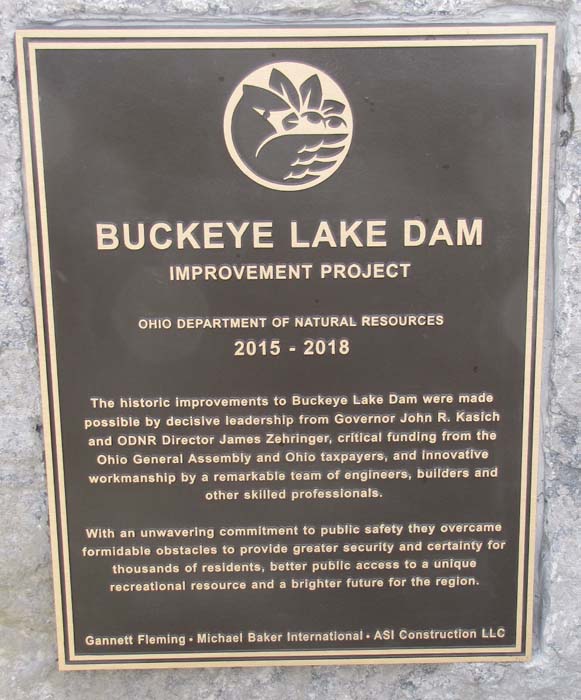