ODNR picks its own advisors 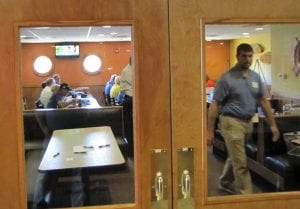 Zehringer’s pledge was renewed last March after ODNR released the U.S. Army Corp of Engineers’ report on the dam and Governor John Kasich decided to reduce the lake’s water level to a hereto unseen ‘winter pool.’ Throughout the spring and summer, some community members who had been talking with ODNR until ODNR cut them off last year, the Buckeye Lake Area Civic Association and the Buckeye Lake Region Chamber of Commerce pressed ODNR managers for a specific forum to discuss concerns and design issues. ODNR managers, particularly senior policy advisor Mark Anthony, continued to give lip service to involving the community in the decision making process, but key decisions like the six-foot high chain link fence and the order to remove docks were “announced,” not discussed.

Anthony thanked Figgins for the “recommendations”. Last week, Hicks invited 13 people to Monday evening’s meeting, calling it an “invitation event for the community.”

Figgins, Fisher, Higgenbothem, Prince, Rizzo and Rogers didn’t pass ODNR’s muster. Hicks promised to release the names to the media, but has ignored the Beacon’s request. We have assembled a nearly complete list of ODNR’s selections. Some names may be misspelled. Community-selected members accepted by ODNR are Craig, Ryan, and Spahr. ODNR selections are:

The meeting was run by Hicks and Gannett Fleming Project Manager Bob Kline. No known ODNR managers were present. A plainclothes security person was present, first sitting in a vehicle facing the Pizza Cottage entrance and then inside the private party room door. There were no incidents.

The ODNR- approved agenda included a Purpose and Mission Statement for the Council. “The Buckeye Lake Dam Improvement Project Community Advisory Council is created for the purpose of working with Ohio Department of Natural Resources and shall advise on matters that directly concern improvements to the Buckeye Lake Dam and surrounding communities. The specific purposes of the Council include the following responsibilities:

• Provide advice and counsel to the project team;

• Serve as a sounding board for the project team;

• Disseminate accurate and timely information to Buckeye Lake community; and

The agenda also list the Council’s Guiding Principles or the “5 C’s.” They are: a. Candid b. Constructive c. Civil d. Confidentiality as needed e. Community interest is paramount

Council members were specifically asked not to talk to the media and were warned that a waiting local reporter (this writer) would be asking them questions after the meeting. Members were not questioned leaving the meeting, but a number of them freely outlined the substance of the meeting. They believe the desire for confidentiality is ridiculous and counter-productive to the Council’s objectives. The Beacon will not identify for obvious reasons the community-minded members who ignored the pleas for confidentially.

The agenda included a Project Update. Members were told that a Construction Manager at Risk would be named soon. ODNR finally told The Beacon that eight firms responded to the Request for Qualifications and that three firms had been short-listed, with technical proposals from them due last week.

Three “critical issues” were listed on the agenda.

• Surveying: It is nearly complete.

• Docks and property removal: The deadline is Nov. 1. The project team was apparently unaware that electric lines are run to a number of docks to power lifts and lights. In response to a question, those lines are to be de-activated and removed. Questions about whether dock owners would be able to re-install docks being removed were not answered.

• Fencing: Kline took responsibility for falsely stating that a six-foot fence was an OSHA requirement, claiming he “misspoke.” He said “other standards” justify the fence. The six-foot height is now “negotiable,” with a five-foot minimum preferred by ODNR. Members preferred fourfeet, suggesting that the same orange plastic fencing that ODNR is using around its Dredge Material Relocation Areas be used. Fence posts will be supported by concrete monuments rather than being driven into the dam.

Members were asked for their specific input on the Construction Schedule Options. The three options are:

• Five days per week, Monday throughFridaywitha6a.m.to 6 p.m. shift. The stability berm, which is the first requirement to increasing the lake’s water level, would be completed in the Fall 2016 (identified as October);

Each member received three tokens that could be allocated across all three options, split between two options or placed on one option. One member favored only Option 1. Option 2 received two tokens. Option 3 was overwhelmingly favored. Light banks would be used to light the construction areas after dark.

Several members commented to The Beacon that it would be very difficult for residents living along or near the dam to sleep under Option 3. Kline acknowledged that back-up alarms on the dump trucks would be a constant nuisance. Option 3 would mean that a dump truck loaded with quarry-sourced bank run will be coming through Buckeye Lake Village every four minutes during working hours.

Several members also mentioned that even if ODNR accepts the very costly Option 3 it doesn’t guarantee enough water in the lake for boating next year. Simple completion of the stability berm won’t automatically trigger higher water levels. ODNR’s Dam Safety Unit must be convinced that the new berm eliminates the risk of seepage. Closing the regulatory spillway gate in July or even in June certainly doesn’t guarantee that there will be enough rainfall to significantly raise the lake level. It typically takes Spring rains from March 1 to late April to bring the lake back from the normal winter pool to full pool. Next year’s depth deficit will be much higher.

One member asked about the seepage areas, suggesting that those areas be addressed first. Kline answered that his firm has just started the dam assessment. That member wryly noted to The Beacon that ODNR claimed that the Corps of Engineers had already assessed the dam which is supposedly the justification for the current low water level.

Council meetings will likely be held monthly with the possibility of every three weeks or so as recommended by one member. A meeting date was not set, but meetings will continue to be held at the Pizza Cottage. Hicks Partners did use some of its $561,330 contract for Stakeholder Outreach to spring for pizza, salad and soft drinks for members.