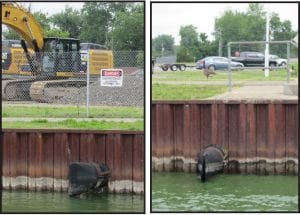 Both drain pipes have ‘duck bill’ backflow preventers to keep lake water at higher levels from flowing into drains and backing up into the parking lots. Beacon photos by Charles Prince.

The two drains are discharging into the lake on both sides of the park’s boat ramp (see photos). They are draining the two large parking lots.

Our readers wanted to know if ODNR was going to cut off these drains as it cut off any discharge of water through or over the dam along West Bank and North Bank in a March 3, 2017, letter from Michael D. Bailey, Chief of the Division of Parks and Water Craft.

Here’s the apparent short answer – NO. We asked project spokesperson Ian Nickey whether the penetrations would be eliminated. Here’s his slightly longer complete answer. “The North Shore parking area and lakeside pile wall is natural ground and not considered part of the dam.” 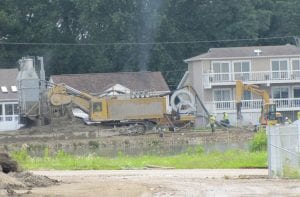 DeWind’s new custom one-pass trencher has picked up its pace in recent days. By Wednesday afternoon it was about half-way done with the 500-some foot test section on West Bank. Soil mixing on the West Bank started on June 27, but progress was very slow for the first 7-8 days or so, moving about a total of 40 feet down the bank. When the 500–some foot test section is completed, it will be cured for about 30 days before the soil mix is tested for strength. The one-pass trencher will be partially dismantled and moved to the North Shore Park where it will start working down the 4.1 mile embankment to Lieb’s Island. 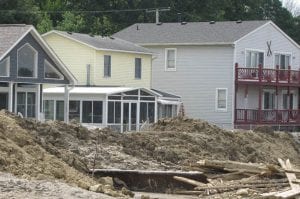 Excess soil mix pours out of the trench, requiring at least one hydraulic excavator to keep it from piling up around the trencher and affecting its operation. These piles are about three feet high and will be removed. Beacon photos by Charles Prince.