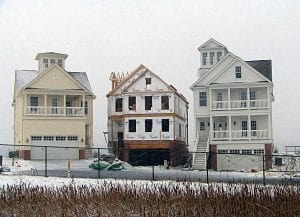 Wachtel & McAnally Architects/Planners, Inc. recently began construction of a single family unit at its North Shore development. The home has been sold. It is flanked by two unsold speculative condos. Beacon photo by Scott Rawdon.

BUCKEYE LAKE – It’s not moving as quickly as once hoped, but it is moving.

The dismal economy slowed progress on a Wachtel & McAnally Architects/Planners, Inc. project near the North Shore Boat Ramp, however developer Garry McAnally says construction continues. In fact, the center unit, now under consruction, has been sold.

McAnally said the housing market woes convinced his company to be more flexible about the development. Now he allows for single-family residences, such as the sold center structure, instead of only constructing condominiums according to the original plan. He said roadways within the development are complete and he still intends to build 14 units along the waterfront. He said future units can be built to meet the buyer’s needs, and will likely cost somewhere between $400,000 and $800,000.

Other features, such as a community gate and some mixed use (i.e. small shops and stores) remain in the plan, but McAnally said the fate of those features is really up to the people who eventually move there. If owners want the gate and stores, they will be built.

“It’s business as usual for us,” she said. Granted, home loans in general may not be as easy to secure as they were before the sub-prime crisis, but Snyder said a person with a respectable credit rating who is not in default and has stable income is still a great candidate for a home loan. “The traditional rules apply,” she said.

Snyder said the foreclosure market in Licking County is actually rather narrow, especially when compared to other areas of the state and the nation. People refinancing their current obligations to take advantage of the existing low interest rates represent a strong portion of the home loans issued, she said.