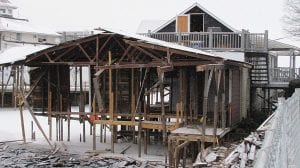 With deeper water than along the West Bank – but not deep enough to float Shoreline Construction of Indian Lake’s tug – the North Bank contractor is using a hydraulic excavator on a barge to remove docks in advance of the new bank run berm. With the tug still on its trailer, the excavator uses its boom bucket to push and pull the barge back and forth to empty its load of dock debris.

By Wednesday evening, only one section of the covered docks at the former Sayre Bros. Marine now Boat Boys’ Marina remained. Next to fall is the only Buckeye Lake house built over the water. The bridge to the Buckeye Lake Yacht Club is the next obstacle. 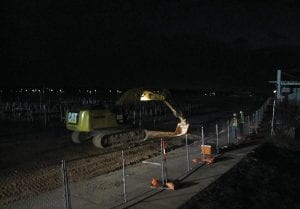 As the 20-hour work day schedule wraps up its second week, its novelty is starting to wear off for embankment-front residents. Complaints about the noise, dust and almost blinding lights are starting to be raised. It’s a long five plus months to the June 1 completion date for Phase 1. 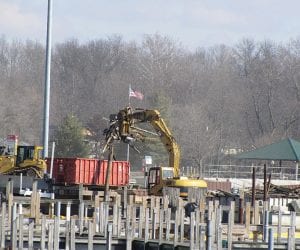 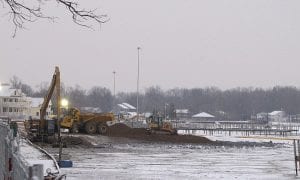