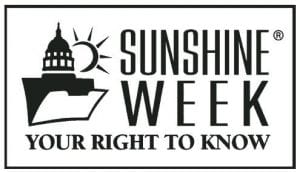 This week is the third annual Sunshine Week. It was created to highlight the importance of open government and freedom of information.

Government, at the local, state and federal level, controls an ever increasing portion of our lives. It demands significantfinancial payments (taxes) at the pain of imprisonment and/or loss of property. In many cases, it controls how we can use our own property (zoning) and what kind of home we can build. There are literally hundreds of thousands of laws and government regulations that address how we live and conduct our activities. New laws and regulations are being churned out daily.

It takes a delicate balance to maintain our basic freedoms in an environment of increasing government control. Our Sunshine Laws in Ohio – The Public Records Law and The Open Meetings Law – are critical tools in keeping government from overwhelming our freedom. First, they demand that governmental bodies make their decisions in the public. Second, they allow anyone to have access to most governmental records, providing accountability for government actions.

Without these critical protections, we would soon findourselves limited to voting in meaningless elections, since we would have little information or knowledge of how government is working and spending our taxes. Some public officials, including too many in the lake area, consider some of the Sunshine provisions to be nuisances. Yes, it would be easier to conduct business in private, using e-mail and the emerging video conferencing technology. Yes, it takes time to respond to public record requests and then to answer questions about those records. It’s a hassle to have to schedule meetings around posting schedules. It’s a waste of time to have to answer questions from uninformed citizens. Yes, government would be a lot more efficient without the Sunshine Laws, particularly for those in charge. We would soon findthat “efficient” government is suffocating our freedom.

Each year our Sunshine protections are assaulted in the name of privacy, convenience and security. Each exception to public disclosure brings closer the day we discover that we have lost control of our government.

A recent Beacon story on Union Township quoted Trustee President John Slater saying that the recently revised Public Records Act now allows trustees to request the identity of the person requesting public information and the intent of the request. In a very technical sense, Slater is correct, but he left out a very critical part. HB9, which amended The Public Records Act last year, in Sec. 149.43 (B) (5) states (emphasis added), “A public officeor person responsible for public records may ask a requestor to make the request in writing, may ask for the requester’s identity, and may inquire about the intended use of the information requested, but may do so only after disclosing to the requester that a written request is not mandatory and that the requester may decline to reveal the requester’s identity or the intended use…” So you DON’T have to make your request in writing, identify yourself or tell why you want the records.

We do suggest you put requests in writing to document when and what you have requested in the event the public officefails to comply with your request. That written record will make it easier if you have to ask a judge to enforce your public record rights.

Public records and open meetings are not just for journalists. These important rights belong to everyone, not just residents or property owners. For example, a Hebron resident can ask for City of Columbus public records. “Use it or lose it” is good advice when it comes to our Sunshine Laws. Take an hour or two some evening to attend a public township trustee, village council or school board meeting. It’s important for our elected officials to see citizens at public meetings. Feel free to ask questions – it’s your government.

If you’ve got questions about your government, ask them. Do you want to see the school district budget? It’s there for you to review. Wonder how your township trustees or village council is spending money? Ask for an itemized list of their expenditures. Wonder what goes on in zoning commission meetings? Ask for copies of the meeting minutes. Want to see a variance application? It’s a public record.