No major incidents at ‘Supercruise’

BUCKEYE LAKE – Mayor Peggy A. Wells reported to council members Monday evening that the village had survived another unofficial ‘Supercruise.’

Wells added, “The original plan to confine tire squealing to the two innermost lanes of the four lane portion of Ohio 79 to provide a buffer between the vehicles and spectators was partially thwarted when the Ohio State Highway Patrol ordered us to open both southbound lanes to alleviate traffic backing up on I-70.” She went on to thank the  many drivers who honored our “no violations” designation for the two-lane portion of Ohio 79 from the North Shore Park to the western village limits. “We did not have enough officers available to actually issue citations to violators,” she explained. There are noticeably fewer tire marks on the two-lane portion of Ohio 79 this year. Wells said  neither the Licking County Sheriff’s office nor the Granville Post of the Ohio State Highway Patrol were able to provide any deputies/troopers to the event.

She thanked  Union Township who provided their officer and  the Village of Hebron for providing three special duty officers, supplemented with some on-duty officers. Wells also thanked Explore Licking County and the Buckeye Lake Region Chamber of Commerce for answering her plea for financial assistance to pay for the special-duty officers. 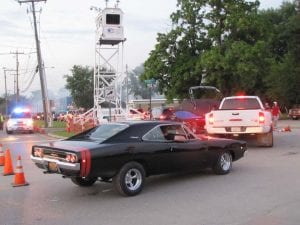 Police tried to keep drivers from continually looping on the four lane section of Ohio 79. 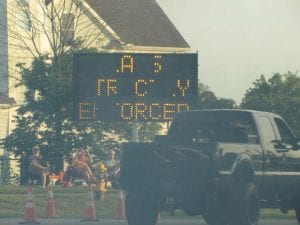 An ODOT message board at the entrance to the North Shore Park warned drivers that they were entering the ‘no violation’ portion of the cruise. 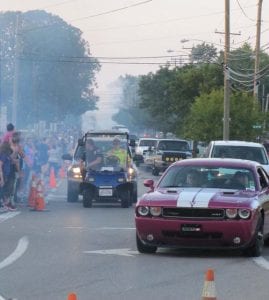 An police officer in a golf cart urged spectators to move back from the roadway after the Ohio State Highway Patrol ordered the village to open both lanes southbound to alleviate a backup on I-70. 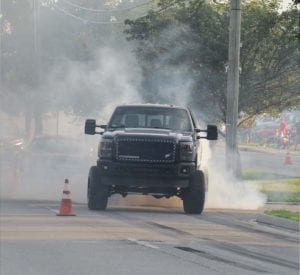 A pickup truck breaks loose during a burn-out by the Corner House. 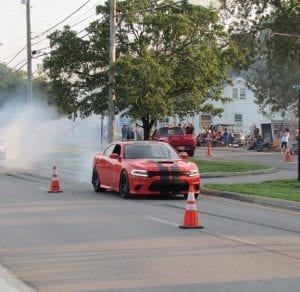 A late model muscle car does a burn-out by the Corner House. 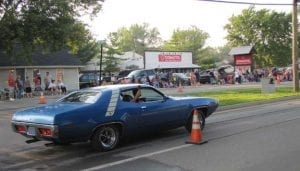 More than a thousand spectators lined both sides of Ohio 79 throughout most of the village.

2 responses to “No major incidents at ‘Supercruise’”