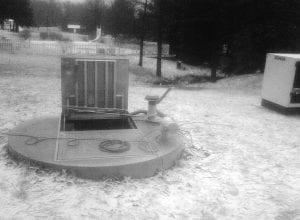 A two-inch line discharges wastewater from a lift station into a drainage ditch that flows into Jonathan Creek Friday morning. Courtesy photo.

She said the lift station – just north of the Thornville corporation limit in the Hagan’s front yard – took on too much water following a two-inch rainfall, previous rainfall, some infiltration and inflow to the collection system, frozen ground, and water from other sources. Strouse said Thornville used a two-inch diameter portable pump to pump out the wet well and discharge the wastewater into a ditch leading to Jonathan Creek, which flows away from Buckeye Lake.

“The village took this action because they could see the water level rising in the man holes in the collection system and were afraid of backups to residential basements,” Strouse said. The lift station serves roughly 175 homes. She said the water pumped from the collection system was “very diluted,” being mostly storm water and it was sampled. She didn’t believe that the pumped water posed any significant health risks, however the village is having the sample tested. Test results should be available next week.

Strouse said the lift station was completed last year and it hasn’t overflowed previously, However, there was at least one alarm incident in which wastewater in the two tanks rose high enough to trigger an alarm, but didn’t overflow. She said the old lift station overflowed once during a heavy storm. “It doesn’t happen often,” said Strouse.

Thornville Village Administrator Ron Koehler said inflow and infiltration, or I & I, is a problem that’s plagued Thornville’s sewer system for a while. “That’s what we’re trying to stop,” he said. The village is devoting more than half a million dollars–$300,000 from and Ohio Public Works Commission grant, $128,000 from a low interest loan, and $82,000 in local revenue – to combat the problem.

Koehler said so far the village has inspected all manholes and completed roughly half of planned residential plumbing inspections to try to determine where excess storm water is entering the system and causing the flooding. He said beginning March 7, television cameras will travel through the sewer lines, looking for cracks or broken areas. Koehler said most older sewer systems have I & I issues. “We’re not sure where it’s at yet,” he said. “We’re trying to determine where the water’s getting in.”

Koehler theorizes sump pumps may be discharging into the system or there are one or more large cracks or breaks in the sewer lines. He said this spring the village would replace a 1,600 feet four-inch diameter pressure line pipe from the lift station with a wider six-inch pressure line pipe leading to a man hole roughly 200 feet north of Columbus Street. “That should take care of the problem,” said Koehler.

John and Blanche Hagan believe several additional issues must also be resolved. They have lived for 40 years on a 97-acre tract just north of the village corporation line on the west side of County Road 30.

John Hagan said they first learned about plans to replace the former completely underground lift station in their front yard when they spotted a survey crew on their property. That crew was working on the route for a countyowned force main from Thornport to Thornville. John Hagan told the county they didn’t have an easement across his property and the main was moved to the other side of the road.

The Hagans challenged the Village of Thornville’s easement for a sewer system on their entire 97-acre tract in Perry County Court of Common Pleas in 2009. They contended such an extensive easement exceeded a deed of easement and resulted in taking of property without just compensation. They are paid $150 per year for the easement granted by the previous property owners.

Their claim was rejected by an assigned judge who did agree that the original 1963 easement needs to be reformed. A construction contract was awarded in March 2009.

The construction plans show the two concrete tanks are to be even with the ground, according to John Hagan. But one tank sticks up 12 inches and the other is 18 inches above ground, even though earth was mounded up to them.

His asphalt driveway provides the only access to the lift station. “I built the driveway,” John Hagan said. The contractor used it to bring in all the heavy construction equipment – the tanks are buried some 20 feet deep – and the very heavy concrete tanks themselves. Now his driveway has numerous cracks and he wants it repaired. “They haven’t put a penny in it,” Hagan added. The Shelly Company bid $6,200 to repair it last year.

He also says the new lift station which now includes two tanks sticking out of the ground plus an above ground standby generator and associated wiring panel hasn’t been properly landscaped. They lost about six trees during the reconstruction. He has an $8,000 bid for landscaping. Hagan maintained the area around the old lift station for nearly 40 years.

Strouse said the lift station is a “separate sub-project” of a new Perry County owned sewage collection system serving an area southeast of Buckeye Lake. The lift station, which was built to replace an old one, does not serve the Buckeye Lake area directly. “The water from the lake area sewers is pumped from the lake area directly to the Thornville wastewater treatment facility,” she said.

Strouse said it’s too early to say if the Village of Thornville will receive a notice of violation for the discharge. “But, that’s certainly one option,” she said. Strouse said the lift station and its design are not active issues with the Ohio EPA unless similar events occur. “Hopefully, the corrections they have planned will be sufficient,” she said. Ohio EPA will inspect and study Thornville’s system later this year, most likely in October.