New township building to open in May 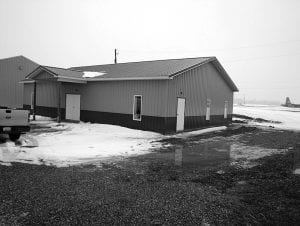 LIBERTY TOWNSHIP – The drywall’s up, light fixtures are in place and the new Liberty Township Office is beginning to look like it’s nearing completion.

“We’re hoping to be in by May,” said Liberty Township Trustee Randy Kemmerer. “We’re going to try to start painting next week, then it’ll be ready for carpet and linoleum.”

He said the new township building, located on Ohio 256 just west of Basil, beyond the railroad tracks on the outskirts of town, is a vast improvement from the former township facility, which meeting attendees may remember as cramped with poor parking. “We’d outgrown it,” Kemmerer said. The trustees currently meet in the township maintenance facility – across Ohio 256 from the new building – since the old township building was sold.

Kemmerer said township trustees contracted Eversole Builders of Lancaster to build the nearly 2,400 square foot structure for $104,000. He estimates roughly $120,000 to be the total cost after furniture and carpeting are installed. He said the old facility on West Market Street in Baltimore sold for $46,000. “That makes this a pretty reasonable building,” said Kemmerer, who was standing in what will be the trustees’ public meeting room. The building also contains restrooms, a secretary’s office, a zoning office, a private room for the trustees and several other rooms. “This has been needed for a long, long time,” Kemmerer said. “This building is going to be here forever.” The trustees plan an open house for this summer. “(The building’s) not fancy,” he said, “but the public will really enjoy it.” 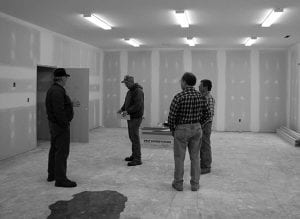 Trustee Ivan Ety is eager to move the trustees out of the maintenance building. “That’s not really working too well,” he said. The new building will have significantly more space than the old township hall, Ety said, and not only will parking be improved, but it will have a far better heating system than the old hall. “We got the gas in there sooner than we expected,” he said. “With a little prodding you can get things done.” Ety’s just happy the township is finally able to have a nice meeting and office facility. “It’s what we’ve always wanted,” he said. “We had the money to do it, so we did it.”