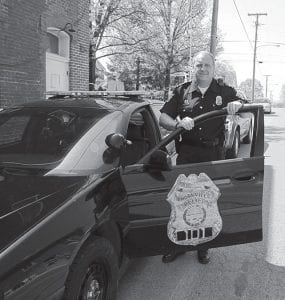 “Basically, I’m the outsider,” he said Friday, his first official day with the department after being sworn in Thursday. In his experience, people are more willing to ask police for help if they know the officers personally. So, he’s spending his first days meeting people in the community and catching up on a mountain of paperwork.

Ball replaces former Police Chief Nick Garver, whose last day serving Thornville was Feb. 17. Ball served with the Fairfield County Sheriff’s Office from 1988 to 2007 and just returned in December from 18 months in Afghanistan where as an ACAS police mentor, he trained high-ranking police officers. Previously, he served as both police chief and village administrator in Laurelville, Ohio, south of Circleville.

Almost all the people he’s met so far told him their biggest concerns are the schools and children at play. He warns drivers to mind their speed and watch for children. “We’ll be out and about,” said Ball. He said he won’t make Thornville a speed trap, “but we’ll make sure all the laws are obeyed.”

Serving Thornville, said Ball, is reminiscent of serving Laurelville, because they’re both smaller, established communities. But there are some major differences. He said Thornville has many related families of several generations and many residents know each other well. “They’ll really try to work things out for themselves,” said Ball. This isn’t any better or worse than calling the police for every last issue, but as long as issues are resolved peacefully, it’s whatever’s best for the resident.

Ball wants all residents to know he treats everyone with the same respect. As he’s out meeting new people, he wants no one to have the impression he’ll favor those he knows personally. He also wants his staff to be assured that he’s planning no big changes for the department regarding personnel or expenditures, although, “I can always use more auxiliary officers,” he said.

“We’re probably going to add a few more auxiliary officers,” said Mayor Beth Patrick. The village currently has five. Patrick said Thornville auxiliaries earn $200 per year, which most spend toward uniforms and equipment. “It’s really more the service to the community they’re looking for,” she said.

Thornville rarely advertises for auxiliary police offers, said Patrick, because the village office receives a constant flow of applications. Auxiliaries are expected to be on duty 16 hours per month, which doesn’t sound like many at first, she said, but most auxiliaries have full-time jobs in addition.

Patrick said the village has no plans to add any more paid officers: Ball, who is full-time, is Thornville’s only paid officer. She said Ball is always on call. When he’s not on duty, auxiliaries and the Perry County Sheriff’s Office are available. All auxiliary officers, on duty or not, live within a few minutes of the village.