New stadium with turf field on schedule for August 17 dedication 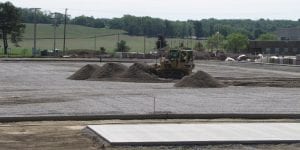 A bulldozer spreads fine aggregate over the coarse aggregate drainage layer for Lakewood’s synthetic turf football stadium. The nearly $3.3 million project ($2.8 million funded by the district) is on schedule. The dedication is set from 6 p.m. on Thursday, August 17, with a Meet the Team event. Beacon photo by Charles Prince.

HEBRON – Lakewood School District board members opened their May 24 meeting with an executive or closed session to review negotiations on new contracts with district employees.

Contract discussions are continuing. Superintendent Mary Kay Andrews told The Beacon there is nothing to report at this time. Board members also discussed the 5.24 mill emergency levy that expires in 2018, but did not take any action on its renewal or replacement.

Board members approved an Amendment to Agreement with Jobes Henderson for engineering/ design services for the new stadium that increases the cost by no more than $28,800 to a maximum of $178,800.

Lakewood’s foreign exchange students – from Italy, Bolivia, Sweden, Brazil, Japan and Germany – made a presentation to board members during the meeting.

The board’s next regular meeting is set for 6:30 p.m. on Wednesday, June 14, in the high school Library.