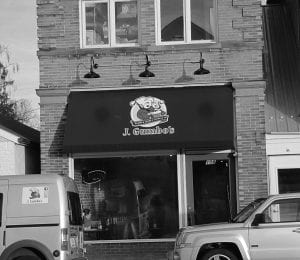 BALTIMORE – A new restaurant in downtown Baltimore was going to open after its ribbon cutting Thursday morning, but why wait?

“It was fantastic,” said Baltimore Village Administrator Scott Brown, who was one of the first to try the new J. Gumbo’s Cajun and Creole Cooking Co., which is nestled in the former First National Bank building on North Main Street. “I’d highly recommend it; it’s a neat little place,” he said.

Brown was one of the first people to have a sneak peak at the restaurant Wednesday afternoon when general manager Fred Baughman opened J. Gumbo’s for a few hours, a day ahead of the official opening.

Baughman said he and his wife, Heather, have lived in the Baltimore area for several years and wanted to open a business that’s different from other Baltimore businesses and restaurants. He owned the old bank and determined that a J. Gumbo’s was a perfect fit for both the building and the village. Heather purchased the franchise. “I own the building, she owns the business,” said Baughman.

After having lived for a while in Louisiana, Baughman said he really developed a fondness for Cajun-style cooking and was confident that people in his hometown would as well. While Cajun food has a reputation for being ultra-spicy, J. Gumbo’s’ selections span the gamut of spiciness from sweet and mild, to atomic, depending upon customers’ desires. He said the menu includes far more than just seafood (chicken, beef, and pork) and even vegetarian options. “Between my love of the building and my love of Cajun food, it all came together,” said Baughman.

“They really did a nice job with the building,” said Brown, adding he was particularly impressed with the restored brickwork inside the restaurant. He said J. Gumbo’s is basically divided in half between a restaurant in front and a pub in back. “They’re completely separate. You don’t feel like you’re sitting in a bar in the restaurant,” said Brown. The Baughmans have a full liquor permit to serve beer, wine, and spirits, and a Sunday license.

Baughman said he’s still working on the bar, which should begin serving later this month. He said the entire restaurant seats about 30 people and, unlike some J. Gumbo’s locations that serve cafeteria-style similar to a Chipotle, his location serves traditionally with a full wait staff. “We do all the work,” said Baughman.