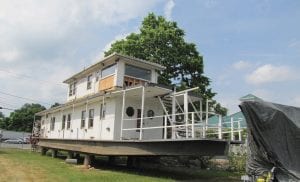 BUCKEYE LAKE – A new addition to Buckeye Lake is a glimmer of optimism during an otherwise depressing period in the lake area’s history, said Buckeye Lake Museum Director J-me Braig. “I’m ecstatic, and so is Buckeye Lake,” she said. “It gives us some hope.”

Wednesday morning, three flat bed tractor trailers brought the 40-ton, 88-feet long Elizabeth Ann sternwheeler from its old moorings on the Muskingum River near McConnelsville, Ohio to Buckeye Lake. Extensive renovations over the next two years will turn it into the Queen of the Lake III. The new Queen of the Lake will become a dinner cruise-themed boat, with facilities for corporate meetings, family outings, motor coach tours, public tours, and dinner theater.

Dr. Ronald and Cindy Downing of Malta, donated the sternwheeler to the Buckeye Lake Historical Society. Ronald Downing built the Elizabeth Ann in 1992 with the help of friends and family. The sternwheeler, which is powered by a 160 horsepower Cummins diesel engine, was a pleasure boat that traveled the Muskingum River between Zanesville and Marietta. 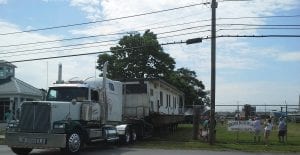 “We’ve had this family project for years and years,” Downing said. She said her father wanted to will her the sternwheeler, but Downing, who now lives with her family in California, had nowhere to put it. She said she searched for someone who would appreciate the craft, and then met Braig. The rest, as they say, is history.

The sternwheeler is now dry docked at the Buckeye Lake Yacht Club boatyard where it will remain until renovations are completed and it is christened with its new name, sometime in spring of 2018. 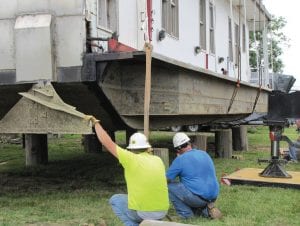 Dan Moder, executive director of the Greater Licking County Convention and Visitors Bureau, said the sternwheeler arrived just in time. “They’re looking down the road,” he said. Moder said one lesson learned during the ongoing replacement of Buckeye Lake’s dam is how vital tourism is to the area.

“It’s refreshing to see them getting ready for better days ahead,” he said. “This is very exciting.” Moder said the sternwheeler will give people another reason to visit Buckeye Lake and set Licking County apart from other Central Ohio counties. “It’s just one more feather in our cap,” he said. Moder said, “It’s going to be a whole new Buckeye Lake” when the state finishes rebuilding the Buckeye Lake dam in 2019. He expects the Queen of the Lake III, once renovated, to be one of the lake area’s strongest attractions. 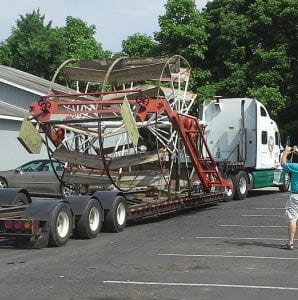 Taylor also built a second larger sternwheeler in 1959, which was 100 feet long and accommodated 300 passengers. In 1973 at the close of the Buckeye Lake Amusement Park, she was sold and moved to Jefferson, Texas. For one season, both sternwheelers navigated Buckeye Lake.

Much later, the Queen of the Lake II, a large 48-foot pontoon boat, toured the historic Buckeye Lake shoreline and Cranberry Bog beginning in 2008. She accommodated more than 50,000 passengers during her tenure, which ended last year when work on the Buckeye Lake dam began.

Braig said volunteers would be needed and appreciated for the Queen of the Lake III’s reconstruction, which she estimates will cost roughly $50,000. She has big plans for the sternwheeler. “The tourism opportunities this unique boat will provide will be exceptional, therefore enhancing the lake’s communities, its businesses, and its people,” Braig said. 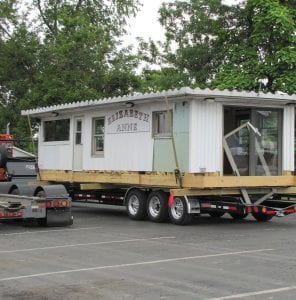