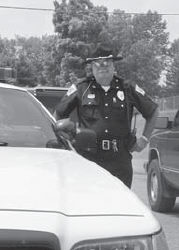 BALTIMORE- Baltimore Police Chief Michael Tussey has met with many local businesses, had an arrest or two, reorganized office schedules, and walked miles of village sidewalks–and he’s only been at his new post for a few days. This was the first week for Tussey, Baltimore’s full-time police chief and former Westerville, Ohio police sergeant.

“It’s been even better than expected,” he said Wednesday. Village residents and business people have been very receptive to him, and open to suggestions about how to reduce crime and increase safety in the village. “I’ve been pleasantly surprised by the enthusiasm of everyone,” he said.

Tussey said he’s spent lots of time walking a beat around the village, meeting people and reminding local youth that the village has a curfew that will be enforced. Now that he’s on staff, the village has a full-time night shift officerwho is keeping an eye out for potential vandals. “It’s a huge advantage to have him on at night,” said Tussey.

Baltimore is “your typical All- American village,” he said, where residents and business owners are accustomed to leaving doors unlocked, keys in vehicles, and wallets and purses unattended. While he doesn’t want to be an alarmist, he’s trying make the point that Baltimore, like many small communities, has changed. Those days are over. “Don’t do things to make yourself a target of crime,” said Tussey. Lock doors and keep an eye on wallets and purses.

Tussey said there’s been a surge of bicycle “borrowings” where bicycles are not really stolen as much as someone decides he or she doesn’t want to walk to a destination, grabs an unlocked bicycle, rides it to the destination, then throws it to the ground when finished with it. He suggests that all bicycles are locked or stored indoors.

Above all, he said, no one should hesitate to call the police if something or someone looks suspicious. Tussey said the police department is very happy to visit homes or do a walk-through if something seems wrong.

The Baltimore Police Department, he said, needs to be in a position where an officercan arrive at a scene almost immediately after police are called. “We’re close to that,” he said.

Tussey has already begun fulfilling one of his goals as police chief–partnering with the schools. He’s met Liberty Union-Thurston Superintendent Paul Mathews and some of the school district staff. Tussey would like to implement the “DARE” drug prevention program in the schools.

It’s not that drugs are rampant in the Liberty Union-Thurston School District, but, “It’s about the prevention of crime within the school district,” he said. The more students know about the dangers of drug use, the easier it will be for them turn them down when and if offered. He’d like to educate the teachers as well. It’s not always the unkempt student who dresses in an unusual manner who may cause problems. Very often, a well dressed and clean cut student who views himself as being bullied or is experiencing problems at home is just as likely, if not more, to have behavioral issues.

Mathews said he met Tussey for the first time May 25 at a safety summit sponsored by Fairfield County Sheriff Dave Phalen. Tussey was one of the speakers. Mathews said Tussey is experienced at catching offenders who are trying to lure minors over the internet.

“It’s a very positive move that the village authorized a full-time police chief,” said Mathews, who added that Tussey will meet the school board June 11 and with the district’s principals soon.

Tussey said Baltimore motorists may findsomething braced beneath their windshield wipers later in the year. Fortunately for many, they won’t be parking tickets. He’s looking forward to implementing the “Habit” program near the holiday season. If an officerfinds a vehicle unlocked or clearly displaying an unattended purse or even Christmas gifts vulnerable to theft, the officerwill place a card beneath the windshield wiper reminding the owner to be cautious.

“It’s about being proactive, not reactive,” said Tussey. It’s important for everyone to know who the police chief is, he said, and he plans to meet as many townsfolk as possible. “Be as proactive as you can,” he said.