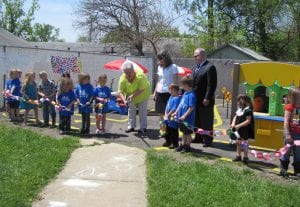 BUCKEYE LAKE – Children in Buckeye Lake Village have a new place to play.

Wednesday, the LEADS Head Start program opened a new expansion to the playground behind the Buckeye Lake Food Pantry on W. 1st Street. The new playground – featuring a new paved area, a flower garden, and a kids-sized village, complete with tiny streets and street signs – was funded through a $5,000 grant from the Licking County Foundation and a $1,000 donation from local McDonald’s franchise owner Don Kissack.

“The children refer to it as their city,” said LEADS CEO Kenneth Kempton. “It turned out great; the children are really enjoying it.”

Melissa Shaw, Head Start health and disabilities manager, said Head Start originally wanted to create a kitchen with the foundation’s $5,000 grant, but discovered it would cost roughly $100,000. A new playground was the next best thing.

“We’re thrilled to be a small part of this,” said Licking County Foundation Director Connie Hawk. “We’re so happy to be able to support this wonderful program.” 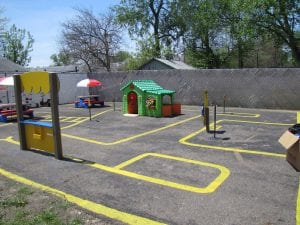