HEBRON – New Life Methodist Church Pastor Brian Harkness is confident the former Creative Catering building will be ready Sunday for “dress rehearsal” services. “It’s all little stuff now,” he said Tuesday, as rolls of carpet unfurled. Dec. 15 will be the first official services in New Life’s new location across US 40 from the Hebron Administration Building, but Harkness plans to hold services in the new building this Sunday “to get the bugs out,” and ensure everything is running smoothly before the official unveiling the following Sunday.

A year ago, Harkness expected it would be another three to five years before his church would be ready to move into a new building, but then things changed quickly. The church was raising money to build a new facility at the Lake Drive and US 40 intersection when church officials discovered that the empty Creative Catering building on West Main Street was available at nearly half of its earlier price. Church officials had looked at the former catering hall in their search for a permanent home but had found it out of their price range. 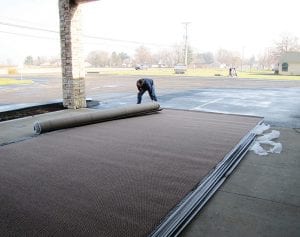 “God gave us the opportunity to take a second look at Creative Catering,” wrote Harkness on New Life’s Facebook page. “The building was listed at $920,000.00 when we looked at it a year ago. We found out that it had been lowered to $459,900.00. When we had looked at it the first time I actually prayed that if we were supposed to buy it, the price would drop in half as a clear sign from God. This price includes about 600 chairs, many tables, over 200 paved parking spots, a whole building generator and a commercial dishwasher, walk in freezer and range hood.”

Today, it’s nearly ready for services. “We won’t wait until everything’s perfect before having church,” said Harkness. The new building has many rooms and purposes, and he said it’s reasonable to expect the church will remain a work in progress, if only for a little while. 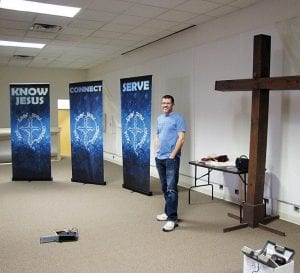 Harkness said the biggest challenge in the transition hasn’t been the building; it’s been the congregations. He has two congregations—a traditional congregation that has met in the old New Life church on US 40 east of downtown Hebron, and a contemporary congregation that’s met at Lakewood Middle School. Harkness said the contemporary congregation has appreciated use of the middle school facilities, but is more than ready for the new building. “We were really roughing it,” he said. However, for some members of the traditional congregation, the transition is bittersweet. “Some have spent their whole lives in that church. They’re advancing the kingdom at the expense of their comfort. I’ve been really proud of them,” he said.

Stained glass, the altar table, and the organ from the old church will be at the new facility to make the transition easier. “The first service deserves traditional elements,” said Harkness, referring to the traditional congregation. 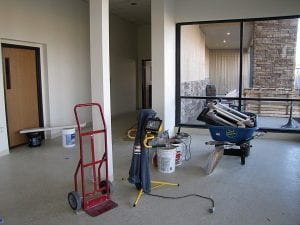 Harkness said the congregation itself has been hugely responsible for the smooth transition to the new building. Tim Wilson is general contractor for the project, and a church member, as is Tom Ellis, who works for Claypool Electric. “People from the church have put in hours and hours (of work),” said Harkness, who estimates members have saved the church roughly $10,000 in sweat equity.

Harkness said even people who are not members believe the church is a perfect use for the former Creative Catering building. “All of us looked at the building and thought it would be great,” he said. “Everybody is excited about it; everybody sees it’s a God thing. No one made it happen by human terms.”

The traditional service is at 9 a.m. on Sundays, followed by the contemporary service at 10:30 a.m. 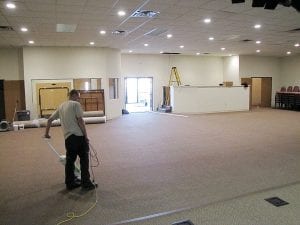