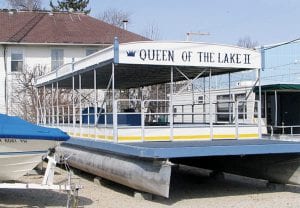 COLUMBUS – Ohio’s economic woes may have a silver lining for the Buckeye Lake area. 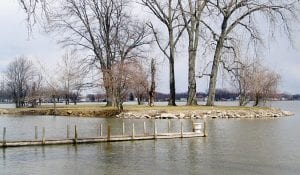 In January, Governor Ted Strickland announced that the Ohio Lottery would add Keno in thousands of bars and restaurants that hold Class D liquor licenses to bolster sagging state revenue. Keno games were expected to increase state revenue by $73 million a year by 2009. The additional money will be used for public education and help insulate schools from cutbacks in state aid.

As news about Ohio’s economy worsens, the addition of Keno by July 1 is increasingly seen as too little, too late. Others have also criticized Keno for its relatively stingy odds and payouts.

"We need more revenue and we need it now," State Budget Director Robert Dinero recently emphasized during testimony before the Senate Finance Committee. That urgency is leading to a pilot initiative at Buckeye Lake State Park.

"We’re going to expand our Ohio Lottery games to include slot machines on a very small, trial basis at Buckeye Lake State Park," Mike Dolan, Director of the Ohio Lottery Commission said. "We recognize that this is a big step, but we have to take it to preserve state funding levels for our schools." 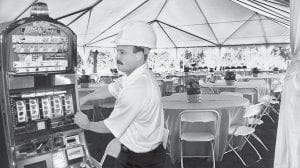 "We’re not ignoring the wishes of voters," Dolan said. "We’re adding some important safeguards to protect area residents." Specifically, anyone living within a 20 miles radius of the center of Buckeye Lake will not be able to gamble unless they complete a state Safe Gambling Course. Modeled after ODNR’s Safe Boating courses, the new eight-hour course will focus on the dangers of excessive gambling, how to recognize a gambling addiction and personal budgeting. The course will cost $79 which includes a box lunch, course materials and a $20 "donation" to the Ohio Council on Problem Gambling. Participants will have two opportunities to pass a written test on program content. The first retake will be free, but subsequent retakes will cost $19 each. "Most people shouldn’t have any problems passing the test if they pay attention during the course," Dolan said.

The course will be offered locally on the weekends and during the week if demand warrants it. Those who successfully complete the day-long course will receive a laminated Ohio Safe Gambler card, good for three years.

While some of the details are still being worked out, Buckeye Lake State Park will be the only site offering casino gambling. Its central location and history as an amusement center prompted its selection for the test, Dolan said. The test will start with video slot machines.

Four venues will initially have slot machines. To ensure tight control, gambling will be strictly limited to Buckeye Lake, which means it must occur on a boat on the lake or on an island in the lake. There will be no slot machines in area bars or restaurants.

The Greater Buckeye Lake Historical Society’s Queen of the Lake II will be outfitted with slot machines. Though it’s the lake biggest boat at 55 feet, it will only be able to accommodate some four dozen slot machines and a like number of passengers. When the weather cooperates, the Queen of the Lake will be used primarily to ferry gamblers from the North Shore boat ramp to Cranberry Bog. Other times it will offer gambling cruises around the lake. All weather slot machines will be installed along an expanded boardwalk at the bog, but none will be visible off the historic bog.

Museum director J-Me Braig said historical society board members had some reservations about outfitting the Queen with slot machines, but ultimately decided to cooperate since casino gambling could restore Buckeye Lake’s status as ‘Ohio’s Playground.’ "Quite frankly, we can also make quite a bit of money," Braig told The Beacon. "I also got an agreement that museum members won’t have to take the course or pay for a Safe Gambler card. That ought to build up our membership."

Officials atODNR’s Division of Natural Areas and Preserves have mixed feelings about adding slot machines at Cranberry Bog. "On one hand, I know more people will have an opportunity to see this oneof a-kind natural wonder and I know how critical the state’s budget situation is, but I wonder if we aren’t selling our soul for the all mighty dollar," said one official who is not authorized to speak on the matter. "But if the state doesn’t get more revenue, all Natural Areas will be able to do is watch the bog breakup anyway. There’ll be no money to protect our special areas."

That same official said theLottery Commission has promised to remove slot machines immediately if there is any evidence that gamblers are degrading the bog. "Hopefully, they’ll be able to get more and bigger boats outfitted with slots and get enough on Mud Island so we’ll just be a temporary home," the official added. He is also pleased that the new slots will be solar-powered with battery backup.

just for us," Dolan said. "Once players try it, they’ll never go back to Caribbean Stud."

"We’re trying to limit our startup costs for this test," Dolan explained. "That’s why we asked to use the Queen of the Lake. We want to see what works best before spending a ton of money."

That’s also why the slot machines on Mud Island will initially be housed in tents, some with heat and air conditioning. Dolan knows that parking at Mud Island is very limited, so buses will shuttle gamblers from satellite parking lots. Finding those lots is proving more difficult than originally thought. "It seems farmers want to plant every square inch with corn, soybeans or wheat this spring," he explained. Small buses will be used to provide frequent service to Mud Island.

If the trial is successful, Dolan expects a permanent casino will be built on Mud Island. They also plan to rename the island and expect to have a contest with a $10,000 prize for the best name.

The fourth venue will be the Buckeye Lake Yacht Club. "We want to test a more upscale site," Dolan said. The club, which is actually on an island, jumped at the chance to add slot machines. Club members, regardless of where they live, will be able to gamble there and won’t need a Safe Gambler card. The club, which celebrated its centennial in 2006, has recently been struggling a bit with flagging membership. A member of the club’s Board of Governors thought a special Gambling Membership might be added. He speculated that the initiation fee might be as low as $500.

At least initially, the yacht club and Mud Island will be only venues offering adult beverages to players. "We don’t know if we’ll have enough room on the Queen for a bar and we promised Natural Areas we would keep alcohol off Cranberry Bog," Dolan said. "We’ll have some great cranberry fruit drinks and smoothies available there.

Operating hours are still up in the air, but Dolan expects the yacht club and Mud Island will have the latest hours. "We’re looking at a 2 a.m. closure at the earliest," he said.

"We recognize that our facilities will be makeshift this year," Dolan explained. "But it’s critical that we get this test underway as quickly as possible. We hope to have the Queen sailing daily by May 1."

The first Safe Gambling course is at 9 a.m. on Tuesday, April 1 in the Millersport Middle School gym. Advance registration is not required. The course runs to 5:30 p.m. Registration is $79, payable by cash, check with ID or credit card. Additional dates will be announced soon.