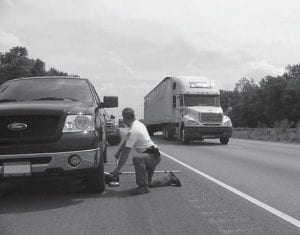 He was nearly finished when he heard squealing rubber and crunching metal. Gary looked over his shoulder to see a large Chevy Suburban SUV tumbling end over end straight toward him. Luckily for him and the stranded motorist, the Suburban came to rest a few yards shy of Gary’s truck. He said the SUV driver served to miss hitting the tow truck in the rain, and flipped his vehicle. Miraculously, the SUV driver walked away from the wreckage and no one was severely injured.

Unfortunately, said Gary, others weren’t so lucky. He said two Ohio tow truck operators were recently killed on the job – Matthew Schilling of Orient in May of this year and Seth Hicks of Circleville in August 2008. Gary said the Towing and Recovery Association of America estimates passing vehicles fatally strike 55 tow truck operators annually along American roadways. These incidents prompted the state to add tow truck drivers to its “Move Over, Slow Down” law, which was originally intended for police and medics. Gary is spreading the word. “A few inches is all it takes to kill us,” he said.

Lt. Tony Bradshaw, Ohio State Highway Patrol spokesman, said tow trucks were just added to the law July 1, 2009. In all, the law now includes “emergency vehicles,” defined as emergency vehicles of municipal, township, or county departments, or public utility corporations when identified as such as required by law, the director of public safety, or local authorities, and police commandeered vehicles.

Bradshaw said authorities realize traffic is too dense sometimes to move into an adjacent lane when approaching a service vehicle. “That’s where the slow down part comes in,” he said. In those situations drivers are required to reduce speed sig- nificantly when passing service vehicles. Bradshaw said individual courts set their own fines for violators. Citations are being written for violators.

It’s important to note that same bill made other traffic law revision. Ohio law now requires all vehicles to display headlights whenever windshield wipers are operating because of precipitation of any kind. Warnings will be issued for windshield wiper violations through the end of this year. Officers may issue citations for headlight violations beginning January 1, 2010.