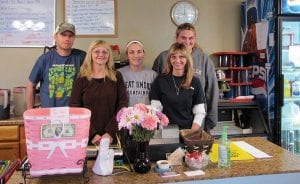 The staff of Our Lakeside Diner are ready to serve diners in their new home. Beacon photo by Scott Rawdon.

Obtaining a permit for the sign is taking far longer than Foster expected so as of March 6, the sign hasn’t been installed. But rest assured that the new incarnation of Our Lakeside Diner is open for business. “We opened it on my dad’s birthday,” said Foster.

Foster said she decided to relocate the diner from its former location on Hebron Road near Mike’s Auto Service when the rent went up. She, with her daughters’ help, began in September to renovate the new location and expand seating capacity from 48 people at the former location to 72 at the new diner.

“My daughters and I did 90 percent of this,” said Foster, admiring the spotless and spacious diner interior. “This is much easier to manage and a lot nicer,” she said.

Foster said the menu has also been expanded. Chili cheeseburgers, patty melts, breakfast sandwiches, and even T-bone steaks are now on the menu. Other than hanging the sign, Foster said the new location is complete. “For winter, we’re done,” she said, adding that her diner is now housed in a building with plenty of Buckeye Lake history.

“It is our oldest business, built around 1900,” said Buckeye Lake Historical Society Director J-me Braig. “It was a hotel mostly for fishermen. There were small rooms upstairs for the fishermen to stay and an area out back for them to clean their fish.”

She said the downstairs was a restaurant, even back then. “At one time it was owned by the Hiemerl family and they built a dance floor onto the east side which is now part of the restaurant,” said Braig. It was called The Tavern for the last 50 years. “It has been used continuously for a business except for the past few years,” said Braig.