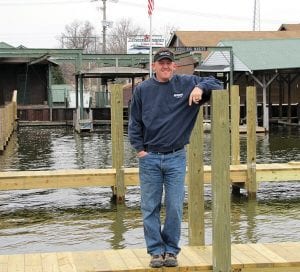 BUCKEYE LAKE – Tim Figgins’ dog almost fell through an old dock in front of the former Sayer Brothers Marine. But, tearing out those docks and installing 34 new slips to serve the more than century old marina was just the beginning for Figgins, owner and CEO of Boat Boys LLC, who is opening a new branch marina on Buckeye Lake Saturday.

In addition to replacing docks, Figgins said he removed roughly 7,000 pounds of scrap material from the marina’s basement that had accumulated over a century. Otherwise, he and his crew have sanded the marina’s floors down to their natural wood and they’re busily preparing the new marina for a Buckeye Lake Chamber of Commerce opening Friday and a grand opening for the general public Saturday. “We’ll be grilling out,” he said. “Everything will be discounted. We want to celebrate being here.” The store features a showroom, clothing, parts, and service, although major repairs may be completed at the larger Newark location.

For those who have lived at or visited the lake for many years, Figgins hopes to preserve some of the old marina’s ambiance. “We want to keep the nostalgia, just breath new life into it,” he said. “We’ve made it a labor of love.”

Returning to Buckeye Lake is a homecoming of sorts for Figgins, whose grandparents lived there. “This is the first place I ever swam,” he said. Initially, Figgins said he joined Boat Boys as a business consultant, not a mariner. He said David Calhoun, a boat mechanic, established the business in 1997 and hired Figgins to help with the administrative end. Eventually, Figgins purchased the business and staffed it with nautical experts. The strategy succeeded as Boat Boys – a business that until now has been landlocked – earned Yamaha’s highest dealer ranking, selling 230 motors from its Newark location last year. He looks forward to offering Buckeye Lake related products like the Piranha propeller, with which each blade can be individually replaced. “The hub is guaranteed for life,” he said.

Figgins said the former owners are pleased with what he’s done. “Zenna has been so happy,” he said. “She feels Bud (her late is husband) is smiling.”