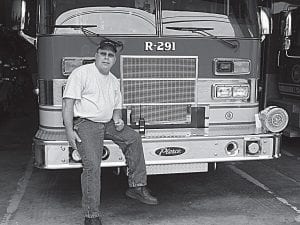 THORNVILLE – He’s entered plenty of burning buildings and won’t hesitate to do it again, said Duane Moore, who was recently appointed chief of the Thornville – Thorn Township Fire Department.

During the July 29 Thorn Township Trustees meeting- where the trustees announced that Moore would be the new chief and former chief Rob Sands would serve as assistant chief – members of the department commented that Moore had never entered a burning building and questioned his experience.

"I am absolutely not afraid to put on a mask," said Moore Tuesday morning. He said he’s been in the fire service since 1982. "They were pushing fire trucks across the floor when I started. They didn’t get the person they wanted and they’re trying to discredit me," he said of people claiming he’s never entered a burning building. Nothing could be further from the truth, said Moore.

There was clear division among fire department members who supported Moore as chief and those who supported Sands; Moore and Sands were the final two candidates for the position most recently held by Chief J.D. Postage. Sands served as department chief from approximately 2003 to 2005 and this is Moore’s first term as chief. The trustees chose Moore because of his administrative skills, they said Sands had already served as chief and resigned, and they believed a new "face" was needed in the department to help calm ten- sions between its members.

Department members commented during the July 29 trustees meeting that Moore has typically driven the emergency vehicles to the scenes. Moore said there’s a good reason for that – he’s a professional truck driver. He also knows how to operate the water pumps. Moore said in the past he entered burning buildings often but in recent years he’s left that to the younger members who are eager for the action. Moore’s strength is operating the machinery, so that’s what he’s concentrated upon lately. "Safety is the big goal," he said. If it’s necessary for him to enter a burning building, he will absolutely do so.

Moore explained that tensions within the department began when former chief Sean Corsi was "let go." Many members believed Corsi should have stayed and didn’t understand why he left Oct. 31, 2006. "Once (the department) got the hate and discontent, it just stayed," said Moore. "I want to get past the hate, the rumors, and the discontent. I want it the way it used to be." It’s a volunteer department, he said. If people aren’t happy serving there, why do it? Being Tear streets a volunteer department makes it tougher to keep the peace, said Moore, because he can’t just fire those who are causing problems. The chief of a volunteer department must work closely with the members to work through issues and Moore is ready to do that. "We’re here to provide a service to the community," he said. "I’m here to get the department back together and help make things better, not to make people angry."

There is no question that the department needs more room and new facilities, said Moore. Infighting between members only makes it tougher to pass levies and, as a result, tougher to provide a new station. Peace within the department is simply better for everyone.

Moore added that he doesn’t know of anyone within the department who doesn’t have gloves; department members commented July 29 that the department sorely lacks basic equipment, like gloves and flashlights. The department may lack the proper number of flashlights, said Moore. He and Sands are working together to order all necessary equipment. "The equipment hasn’t been bought yet, but we’ll make sure everyone has what they need," said Moore. He and Sands also chose members for new committees, who will be announced soon.

Moore is ready for the work ahead of him. "I’m here to do a job and I’m going to do it," he said. "We’re here for the township. All they have to do is call us."