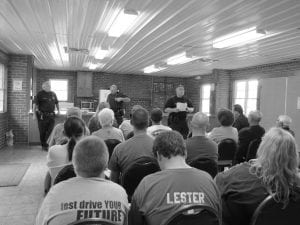 Nearly two dozen Baltimore residents attended a July 30 organizational meeting for the village’s new block watch program. Police Chief Michael Hussey described the new program as “neighbors watching out for each other. It gives us eyes in the neighborhood.” Lt. Jason Harget, at left in the photo, is the program coordinator. He emphasized, “We don’t want anybody driving around looking for crime.” He encouraged volunteers to contact him via cell phone or email. Hussey, left in the photo, said the next step is to sort out where volunteers live so they can starting forming specific groups. Each one will have a captain. He urged residents to call police immediately if they see something suspicious. “It it makes you uncomfortable, it makes us uncomfortable,” he added. Block watch volunteers will meet monthly, except for December, January and February, at 6 p.m. on the last Wednesday of the month in the Johnson Park Shelterhouse. Hussey said the department will provide a year-to-date crime activity map at the August meeting. Signs will be posted in block watch neighborhoods. One possible sign reads, “If I don’t call the police, my neighbor will.” Beacon photo by Charles Prince.

JACKSONTOWN – None of the Legend Valley neighbors present at Monday night’s Licking Township Trustees’ meeting agreed with the anonymous neighbor quoted in last week’s Beacon. Several criticized The Beacon for publishing the neighbor’s negative comments about the recent Gathering of the Juggalos.

Kindle Road resident Larry Gerlach lives the closest to Legend Valley. “I had some problems,” he told trustees. “My windows did shake.” His son who lives nearby had something vibrated off a counter.

Gerlach thanked Legend Valley co-owner Steve Trickle for confiscating spray cans from concert goers. “We did have problems sleeping at night,” Gerlach added. “The fireworks were the big problem.” He suggested that fireworks be confiscated like spray paint in the future.

“If we work with him (Trickle), he will work with us,” Gerlach said. “I’ve got a friend here and I want to keep a friend.” Later in the meeting when Trickle was asked if the Juggalos were returning next year, Gerlach said, “I hope not.” Trickle said, “I can’t answer whether they are coming back next year.”

Roley Hill resident Ron Patterson who lives just east of Legend Valley said, “The concerts before Trickle were a hell of a lot worse. We sit outside and listened to it.”

Gerlach’s neighbor, Mike Snelling said, “It’s noisy, but it’s good clean music. We enjoy it… We don’t pay a dime to go to the event.”

Roley Hills resident Connie Gockenbah said, “If we have a problem we call Steve or Laurie (Steve’s wife and venue coowner).” David Budd, a Roley Hills resident who lives due east of Trickle’s home said, “None of this was a problem. Steve is growing a business and playing within the law. Fireworks are beyond his control… You will have some hooligans in every group. None of that is Steve’s fault.”

Earlier in the meeting, Licking Township Fire Company Chief Mike Wilson commented on the concert. He said communication with the out-of-state promoter was the biggest problem. “Vendors weren’t prepared and fire lanes got closed,” he said. Wilson wants a post-concert meeting with the promoters, Trickle, law enforcement agencies and Licking Memorial Hospital. The fire company had five concert related runs before the concert began and four outside the grounds during the concert. “The on-site EMS service did pretty good,” Wilson reported. He believes the contracted service transported about 25 people.

Wilson said their concert runs weren’t a hassle and did not affect service to the rest of the township. He didn’t increase staff because the projections for attendance at the four-day event weren’t overwhelming.

Township fire inspector Mike Briggs spent the equivalent of a couple days at the concert. He inspected 35 structures and most didn’t pass the first time. His biggest problem was the loss of some fire lanes, but said some Juggalos helped reopen them. “I had absolutely no problem with them (Juggalos),” he concluded.

Steve Trickle said he received a lot of calls and emails before the event about what people read on the internet. “I didn’t just say ‘yes’ when they contacted me in February,” he explained. Trickle added that the Licking County Sheriff’s Office didn’t have any problems when headliner Insane Clown Posse performed here seven years ago.

“This was rap rock music,” Trickle acknowledged. “It was pretty loud.” He told trustees that contractually he has control over volume after 12:30 a.m. Trickle added that having all-night music keeps the music fans from wondering around. He drives a golf cart on the roads around the site to check on noise. One source of noise were some DJ systems said up in the RV camping area. Trickle asked several to turn their amplifiers down or in another direction. One refused until he agreed to refund his RV fee, he said.

“The fireworks were a problem,” Trickle agreed. “They did sneak fireworks in. We will do better to check people’s bags to keep fireworks out.”

“I have roughly one (concert) a month,” Trickle explained. “I try to respect the neighbors. My phone rings off the hook from people wanting do shows…One a month is enough.” Trustee Dave Miller complimented Trickle for the quick litter pickup.

“I’m thanking our neighbors for putting up with what we are trying to do,” Laura Trickle said. “I’m the grumpiest neighbor on noise.”

She said the concert had a major economic impact on the township and Licking County. $30,000 went to the Licking County Sheriff’s Office for special duty deputies inside the grounds, she said. $70,000 went to non-law enforcement people working the concert. Several hundred thousand went into Licking Township. People from every state in the country were present.

“I hated this music,” Laura admitted. “We’re trying to put back in this community. We have learned to huddle with our community.”

Trustee President Joe Hart said Trickle allows him to come on the premises and responds to his calls. “There are probably as many people as those here who don’t like what is going on,” he added. “There is a variety of opinions.”

Hart said trustees adopted a resolution before the concert addressing legal fireworks displays. They must be concluded by 11 p.m. and it applies township-wide. Hart said the promoters were “more helter skelter” than those in the past.

Trustee John Holman said he didn’t receive a lot of complaints, but said the Juggalos’ internetreputation caused some sleepless nights for some residents. “There were some attempted sleep-overs at Dawes,” Holman reported. “There is some apprehension out there,” He suggested that Trickle pick and choose concerts carefully to make sure it is worth it.

Resurfacing projects with the Shelly Company low bid are:

“I have some concerns about Licking Trails North,” Hart said. Earlier, trustees removed the portion from US 40 to the bridge over I-70 after ODOT announced plans to replace the bridge yet this year. Hart’s concern was prompted by heavy equipment using Licking Trails to link the new the Jacksontown sewer collection system with the Licking County sewer system near Lakewood High School. Construction started last week.

Hart also asked fiscal officer Andrea Lynch if the township had sufficient funds for the roads bid. She said $300,000 had been appropriated out of the general fund for road materials for this year. None of it has been spent. An additional $100,000 was appropriated in the Road & Bridges account for road materials. Lynch said expenditures there ranged from $68,000 to $76,000 annually so most of the cost would have to come from the general fund appropriation.

“We are going to dip into our reserve,” Hart added. “I’m not saying we shouldn’t make this investment. Both Holman and Miller agreed with Hart’s concerns about repaving any of Licking Trails this year. Trustees unanimously dropped the Licking Trails project and approved a $204,684.50 contract with The Shelly Company for the balance of the roads. The contractor listed a Sept. 2 start date and an Oct. 31 completion date.

Trustees also unanimously approved the final step to place a one mill, five year replacement levy for fire/EMS services on the Nov. 4 ballot. A replacement levy returns the tax rate to the original one mill rate. If voters approve the measure, the levy will bring in about 16 percent more per year for a total of $131,785. The Licking County Auditor’s Office said the replacement levy will cost the owner of a $100,000 home $35.00 per year, compared to $30.12 for the current levy. The township has two one-mill, five year fire levies.

Wilson asked trustees to approve William Austin Hohl as a volunteer firefighter. He is a junior member of the department. “He has worked as hard as any senior member,” Wilson said . The company’s membership unanimously recommended him and trustees did the same.

Wilson also asked Miller to review the sewer system contractor’s use of the parking lot at Stations #1 and #3. What started out a couple of piles of material and a parking area for a few pieces of equipment has turned into a depot. Wilson said a tracked boring machine was driven up Phil Linn parkway and across the Station #1 parking lot, leaving indents in the asphalt from the unprotected metal treads.

Zoning Inspector Forrest Cooperrider issued one permit since the last trustees’ meeting. He said it had been long awaited. The no-cost permit allows the installation of a solar power array at the Lakewood Schools complex off Lancer Drive. Cooperrider, who is also a long serving Lakewood School Board member, said the project is getting started about a year later than expected. Work will start in September.

Trustees’ next regular meeting is set for 7:30 p.m. on Monday, August 18, at the Licking Fire Company Station #3 on Jacksontown Road (Ohio 13).