Neighbors stand up to Foundation on bike trail 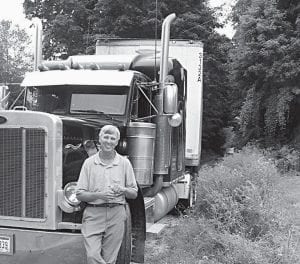 Above, South Fork Road resident Joe Simon stands beside a truck, which prevents the T.J. Evans Foundation from paving a Licking Township rail bed for use as a bike trail. Property owners, above right, are blocking the former rail bed to prevent The Shelly Company from extending pavement south into Licking Township. Beacon photos by Scott Rawdon

LICKING TOWNSHIP – Heck no, they won’t go! Dozens of Licking Township residents who live along a rail bed that once supported the Buckeye Scenic Railroad parked trucks, construction equipment, other vehicles and themselves on the former rail bed to stop the T.J. Evans Foundation from paving it into a bicycle trail.

“It’s like no one has any rights,” said South Fork Road resident Joe Simon.”There’s never been any communication from the Evans Foundation.” Simon said the original railroad had the right to cross his property many years ago when the rail line was created. But, since the tracks are no longer there, the bed is no longer a railroad and the Evans Foundation, he said, doesn’t have the right to pave the rail bed into a bike trail without property owners’ permission.

Simon said four years ago, residents who live along the rail bed signed a petition clearly stating that none of them wanted a bike trail to be placed arbitrarily across his or her property. “We were completely ignored. We own the property,” he said. “They had the right to operate a train, but the train is gone.” Simon explained that the Evans Foundation only holds a quick claim deed from the railroad. “There were no sales (of property). There was just the sole purpose of operating a railroad,” he said. 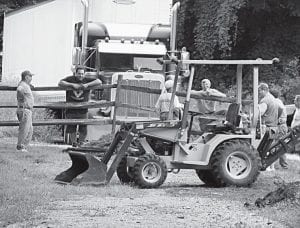 “I can’t get any help from the government,” said Simon Wednesday afternoon. That morning, Simon saw pavers from the Shelly Company getting ready to lay asphalt on the rail bed. He took his cell phone and a lawn chair to the rail bed, sat down, and started making calls. “Everybody just showed up,” he said.

South Fork Road resident Brad Smith was grilling hot dogs on the rail bed Wednesday afternoon, feeding several people who were standing (or sitting) their ground. When asked how long he and neighbors would continue the vigil, he said, “As long as it takes.”

Simon said he wasn’t sure when Shelly Company workers would return and reiterated that no government officials have contacted him.

T.J. Evans Foundation Direc- tor Sarah Wallace could not be reached for comment.

Licking Township Trustee President Joe Hart said that prior to his term residents along the rail bed approached trustees, asking if the T. J. Evans Foundation would violate zoning by paving the rail bed into a bicycle trail. Hart said the trustees contacted the Licking County prosecutor’s office, who said zoning requirements don’t apply because the old rail bed is considered to be a transportation corridor. “(The trustees) didn’t pursue it any further,” said Hart, adding that the trustees never received the prosecutor’s opinion in writing.