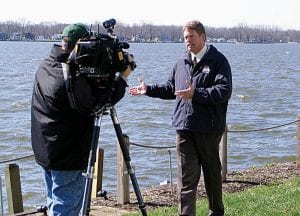 BUCKEYE LAKE – NBC4 News Reporter Marshall McPeek is getting to the bottom of a newspaper report about the sale of Buckeye Lake to an Australian developer-or is he?

McPeek and camera man Joe Clark visited Buckeye Lake and The Beacon April 1 to put their own spin on The Beacon’s annual April Fool edition, which this year had some readers believing Buckeye Lake would become the party capital of the Midwest under Macquarie Infrastructure Group (MIG) of Melbourne, Australia’s ownership. McPeek said the NBC4 newsroom received many curious and furious calls concerning The Beacon’s report and he wanted NBC4 to get in on the action. The NBC4 piece was broadcast Wednesday evening, April 1. The video and McPeek’s news story are still available on NBC4’s website at www.nbc4i. com/. Simply search the website for “Buckeye Lake.” 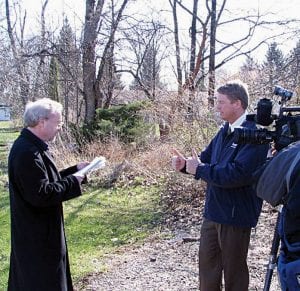 McPeek said that the current NBC4 management wants to add some humor and lighter subject material to its broadcasts in addition to its traditional “hard news” stories and The Beacon parody filled the bill.

This is the tenth year for The Beacon’s special “story.” The series began in 2000 with a “story” describing how the Millersport Sweet Corn Festival was forced to change its name to the Millersport Brussels Sprout Festival. Since then, we’ve introduced the razor-tooth sucker fish to Buckeye Lake, returned Cranberry Bog to its Canadian home, drained Buckeye Lake during the summer to make it easier and less expensive to repair the dam among other exclusive reports you’ll only find in The Beacon.

According to infoplease.com, the origin of April Fools’ Day, sometimes called All Fools’ Day, is uncertain. Some see it as a celebration related to the turn of the seasons, while others blame a change in the day the new year is celebrated. Some ancient cultures celebrated New Year’s Day on or around April 1. It closely follows the vernal equinox. 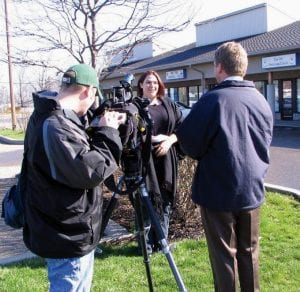 In 1582, Pope Gregory XIII ordered a new calendar (the Gregorian Calendar) to replace the old Julian Calendar. The new calendar called for New Year’s Day to be celebrated Jan. 1.

According to a popular explanation, many people either refused to accept the new date, or did not learn about it, and continued to celebrate New Year’s Day on April 1. Other people began to make fun of these traditionalists, sending them on “fool’s errands” or trying to trick them into believing something false. Eventually, the practice spread throughout Europe.

But, there are at least two difficulties with this explanation. The first is that it doesn’t fully account for the spread of April Fools’ Day to other European countries. England did not adopt the Gregorian calendar until 1752, for example, but April Fools’ Day was already well established there by that point. The second is that there is no direct historical evidence for this explanation, only conjecture, and that conjecture appears to be more recent.

Joseph Boskin, a professor of history at Boston University, of- fered another explanation of the origins of April Fools’ Day. He explained that the practice began during the reign of Constantine, when a group of court jesters and fools told the Roman emperor that they could do a better job of running the empire. Constantine, amused, allowed a jester named Kugel to be king for one day. Kugel passed an edict calling for absurdity on that day, and the custom became an annual event.

“In a way,” explained Prof. Boskin, “it was a very serious day. In those times fools were really wise men. It was the role of jesters to put things in perspective with humor.”

The Associated Press offered this explanation in many newspapers in 1983. There was only one catch: Boskin made the whole thing up. It took a couple of weeks for the AP to realize that they’d been victims of an April Fools’ joke themselves.