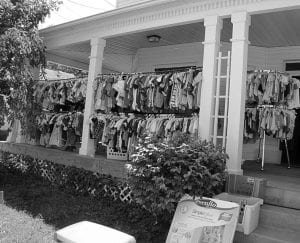 LICKING COUNTY – It promises to be an exceptional year for the annual US 40 Yard Sale this weekend, if Wednesday was any indication. “Today’s really been busy,” said Hebron resident Pam Stratford, who had customers Wednesday morning before she even had a chance to price several racks of clothing for sale on her porch.

Locally, the yard sales run the 32 miles of US 40 from Reynoldsburg to Gratiot, and through Jacksontown, Hebron, and Kirkersville June 1 through 5. “There are some people who drive an hour to come to my garage sale,” said Stratford. Usually, Stratford doesn’t set up her porch full of clothing and random items until Thursday or Friday, but the weather was so nice Wednesday that she decided to start early. “Some people have wondered why more (vendors) aren’t set up yet,” she said. Stratford anticipates roughly 1,000 people will tour her porch to look at everything for sale. “I’m so excited,” she said.

“We’re new with it this year,” said Newark resident Joe Humphrey, who sat beneath a tent covering tables full of miscellaneous items across US 40 from Lakewood Middle School. He wasted no time in setting up his display as early as possible Wednesday. Humphrey said his original intent was to gather items to create his own flea market, but some health issues stood in the way of his goal. Instead, he hopes the US 40 Yard Sale will help him recover some of his investment in everything he purchased for the flea market. The sun beat down relentlessly on Humphrey’s dusty location, but that didn’t stop a steady stream of US 40 motorists from stopping to take a look. “Hopefully, we can stay in the shade,” he said.

“We’re just trying to jump start our sale,” said Hebron resident Rob Moyer-Huey. “It’s really been busy today.” He and family members were setting up shop just east of downtown Hebron. Like Stratford, it was difficult for Moyer-Huey to organize his display between all the customers. He said it took his family a couple months to collect all the items they’re selling this weekend. They have enough that they can continue restocking through Saturday.

According to the Ohio Department of Development, Division of Tourism, US 40 Yards Sale Days event is a celebration stretching from Maryland to St. Louis. This event honors the first federally funded highway, which was authorized by Congress in 1806, when President Thomas Jefferson was in office. The National Road in Ohio was designated a State Scenic Byway in 2000 and an All- American Road National Scenic Byway by the Federal Highway Administration in 2002. The National Road travels through six states, including 10 Ohio counties.

Stratford said she lowered her prices this year and intends to take advantage of the whole weekend, which, as of Wednesday promised to be partly sunny and hot each day. She expects this year’s turnout will be much better than last year’s when it rained some of the weekend. “We still made money, though,” she said.