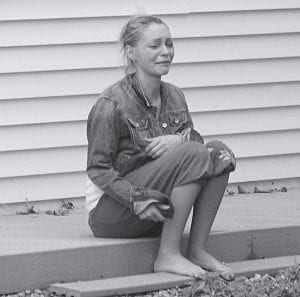 Tanya Hager grieves outside of Raymond Dymek’s Shepard Avenue home Friday afternoon in Walnut Township. Earlier, Dymek shot and killed her father, Hayden “Dave” Sloan, before turning a gun on himself. The three were living at Dymek’s home. Beacon photo by Scott Rawdon.

Neighbors described an incredibly strained situation within Dymek’s home after he agreed to take Sloan and Hager in when they had no home of their own. Dymek, 56, and Hager developed a close friendship – Hager told reporters it never became intimate. Sloan didn’t approve and he reportedly made several threats against Dymek’s life. Dymek finally had enough and murdered Slone. He took Hager to Licking Memorial Hospital before becoming involved in a 90-minute standoff with police in Heath.

“It was a bad, bad situation. It was building up for a long time,” said Robin Thompson, who lives next door to Dymek’s home. She said she sometimes employed Dymek to work on her rental properties.

“Ray’s a good guy,” said neighbor Bill Courts Friday, who added that the neighbors worried about violence within the home. He believed that Dymek was provoked, saying Sloan often threatened Dymek. As far as the neighbors were concerned, the tension between Dymek and Sloan, built to a breaking point and Dymek finally snapped.

There are no more suspects in the case. Fairfield County Sheriff Dave Phalen said Tuesday, “Our investigation is concluded for all intents and purposes.” He said he didn’t know where Hager went after the incident.