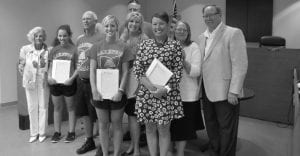 Lady Lancers softball Coach Criss Nadolson apologized for having only one member of the softball team in attendance. “We really appreciate you recognizing us,” he said. “The problem we have this time of year is students are back in school and since we have students on our softball team, they’re playing other sports (in addition to softball) now.” Plus, he said the four seniors on the championship team have already gone to college. “All the kids would be here if they could be,” Nadolson said. He said the state championship was really an accomplishment. “We’re really proud of them and we’re proud to represent you and our community, so, thank you.” 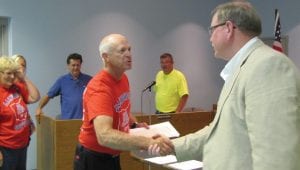 Wells said Union and Licking townships already honored the team and she apologized that council didn’t honor them sooner. “I went to the semi-finals in Akron,” Wells said. “That was such an exciting game. If you’ve never gone to a girls’ softball game, it’s just a tremendous honor and privilege to go there and to see the level of play that you’ve all accomplished.” 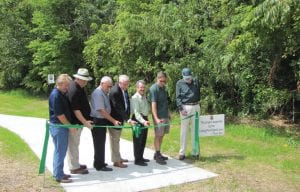 A proclamation given to the Lakewood Lancers girls softball team players and staff said, he proclamation states, “Whereas, the hard work, dedication, sportsmanship, talent, and exceptional team spirit of the 2016 Lakewood High School Girls Softball team produced and unbeaten 29-0 season record, and;

“Whereas, their impressive performance throughout the season propelled them to earn the title of the Division II State Softball Championship Team, and;

“Whereas, we applaud not only the character and effort of these students but also their proud parents for their role in supporting the long hours of team training, practice, and heavy schedule to achieve their ultimate goal, and;

“Whereas, the athletic, academic, and overall success of these students in working together as a team to accomplish such a high level of victory serves as a lesson for us all, and;

“Now therefore, be it resolved, that we the council and the mayor of the Village of Buckeye Lake do hereby recognize and honor your accomplishments throughout the season which led to you victory as Division II State Softball champions.

• Buckeye Lake Police Chief James Hanzey said last weekend’s Super Cruise event, which was held in conjunction with National Trail Raceway’s annual Mopar event, went well. He said there was only one traffic stop and that was for a person driving without a license, not for tire “burn out.”

“It’s not the Mopar people causing the problems,” he said; its people who own Hondas and other small vehicles that lock their rear wheels with the emergency brake, and then drag the rear wheels down the street with front wheel drive.

“The police department did an excellent job of having people out and present in locations up and down 79,” said council member Tim Ryan. “I thought it was great.”

Ryan said the Buckeye Lake Brewery enjoyed very strong business during the event, as did Donato’s. He said it was difficult to move inside the Pizza Cottage. “I mean, it was slammed,” he said. “(The Super Cruise) is a welcomed event.”

Buckeye Lake Fire Chief Pete Leindecker said Heath has basically shut out the Super Cruise drivers and there were almost none in the city that night. “They were all down here,” he said.

Ryan said no one complained about closure of the North Shore Boat Ramp to Super Cruise participants. “Keep it closed, you guys,” he said.

Council member Doug Poorman said the village should figure out how to capitalize even more on the event next year.

“I thought it was a good event as well,” Carroll said. He said this year there were more police and additional signage from last year’s event. “I thought we had a pretty good flow for the traffic,” Carroll said. He said he would meet with the police department to determine if anything could be done to make next year’s Super Cruise even better and safer. He said all village departments helped with the event.

• Poorman said Buckeye Lake Community Development Committee members agree the village should accept the T.J. Evans Foundation’s offer to lease the former LEADS building and an adjacent parcel near W. 1st Street to convert to a community center. “It’s free,” he said of the lease. “The idea is to accept the T.J. Evans Foundation lease and move forward with cleaning up the building.”

Poorman said two general contractors inspected the former LEADS building and said the roof needs work, but otherwise the building is well maintained. He said the building could use a “facelift” to be more attractive. “We’re getting bids on that stuff,” Poorman said.

“We have a great opportunity here, I think, to do something different,” said Lou Moresca. “We can provide a source of information and education for the people in Buckeye Lake. We’re in a position, because of this building, perhaps to provide some services that people are not able to access easily.”

Moresca suggested rotating office hours for various services, such as Social Security advice, food stamps, or maybe a nurse to come in on occasion, as well as other services. “We can make these services available here, so people don’t have to travel long distances,” he said. “That’s one part of it.”

Moresca said there’s also an opportunity for a “learning curve” whereby the village could offer all types of instruction for young and old alike. “Teaching people to do new things that they would not have the opportunity to learn otherwise,” he said, such as chess, cards, golf, or other activities, “Give them something they can carry way into the future,” Moresca said. He said he’s not only for a place for people to play games, but also, “To have them come away from this experience with something they can take with them the rest of their lives.”

Ryan said he contacted Garry McAnally of Wachtel & McAnally Architects Planners, Inc. for advise on what to do to make the former LEADS building more attractive; McAnally is one of the architects creating the North Shore Landing complex across SR 79 from the LEADS building. “He is very happy to work with us,” Ryan said. “He said he’d see what he could do.”