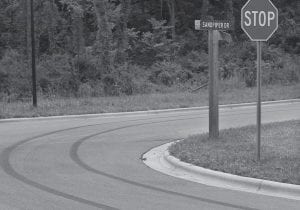 Subdivision streets were also used for tire burnouts last weekend. This one starts on Bobwhite Court and extends onto Sandpiper Drive. There were others in the Bobwhite cul-de-sac and on Avondale Road. Beacon photo by Charles Prince.

Two weeks ago, the complaints focused primarily on parking and noise. Last year, after years of delay and a few missteps, trustees, in conjunction with the Licking County Sheriff’s Office, the Licking County Engineer, and the Licking County Prosecutor’s Office,finally banned parking along Avondale Road. The road now features prominent “No Parking Anytime, Tow Away Zone” signs. Bar patrons parking partially on the roadway have at times made it difficultor nearly impossible for large emergency vehicles to use the roadway.

Bar patrons are now parking in The Woods subdivision which is about 10 percent built out. Sandpiper Drive runs into the subdivision from Avondale Road. Both Sandpiper and Bobwhite Court which is a culde sac off Sandpiper are jammed with Captain Woody’s patrons on weekend nights. Bar patrons are also parking on the Quail Run cud-de-sac which overlooks the lake. Residents say revelers park there and walk down through a home construction site and a small woods to get to Captain Woody’s through the back.

“We tried to get you an answer,” Trustee Dave Miller told residents. He explained that the township’s legal counsel, assistant county prosecutor Judy Edwards, is on vacation until the end of the month. Miller said there are problems banning parking in residential areas, citing the additional traffic generated by residents’ own parties. He believes banning parking on one side of the street isn’t fair to residents on that side.

“It’s just not the parking,” resident Ed Rickels told trustees. “It’s a safety issue.” The longtime police officer said there must have been a hundred people in the roadway early Sunday morning when Captain Woody’s closed.

“I shouldn’t have to guard my property,” Rickels added. He sat on his porch with a firearm for hours. Rickels characterized it as basically “a riot” several times, recounting revelers in the yards, fighting and urinating. He turned over a number of photos to trustees, including photos of blood in the street. He added that a charter bus dropped off and later picked up passengers going to Captain Woody’s in the subdivision.

Rickels suggested that onstreet parking in the subdivision be prohibited after 9 or 10 p.m. until 5 or 6 a.m. That would stop bar patrons from using the subdivision as a parking lot with little impact on residents’ own needs for additional parking. “I look forward to you helping us,” he told trustees.

Trustees asked Rickels if he complained to the sheriff’s office.He said there were several calls. His wife said two sheriff’s officecruisers were in the area which they flagged down. Rickels said they didn’t handle the problem. His wife was more direct, “They could basically care less.”

Jerry Linkhorn, who owns a lot on Sandpiper, said some lot owners are considering selling rather than building, due to the problems with bar patrons.

Licking County Sheriff Randy Thorp told The Beacon, “We received no calls in reference to that disturbance.” Two deputies were on extra duty detail at Captain Woody’s. Two road patrol deputies did respond to the bar to check on the extra duty officers, he said.

One deputy was flagged down by a resident as they were leaving the area, Thorp said. By that time, he said, the incident was over and the deputies didn’t know what had occurred. His officedidn’t receive a call about the incident until Licking Memorial Hospital called after the victim was transported there. A detective is investigating the fight.

Thorp said extra duty officersare there to provide security for the event or business paying for them. However, they “can and will respond” to threatening situations until on-duty officersarrive.

Thorp said township trustees may enact parking restrictions in the subdivision such as those suggested by Rickels. The sheriff’s officehas the authority to enforce those regulations, but it becomes an issue of resources and priorities. Thorp said the trustees can contract with his office to enforce the restrictions. Such a contract could be limited to weekend evenings for a couple of months during the summer. The contract, he said, can be specifically tailored to the township’s needs. Trustees offered little relief to residents “It’s kind of a complex issue,” Trustee Joe Cooper said. “We’ll do whatever we can.”

Trustees recounted how difficultit turned out to be to get the “no parking” signs on Avondale Drive and then to get them enforced.

In other business Monday night, trustees opened two bids for the second round of road resurfacing this summer. The proposed projects are Lakeshore Boulevard from Ohio 13 to Westview, all of Park Drive, Moon River from Lakeshore to the stop sign, all of Amherst and all of Terry Linn and Hazel.

Before the bids were opened, Trustee Dave Miller reported on a telephone conversation with one of the bidders, Small’s Asphalt Paving. “The bids were kind of confusing,” Miller said. Square yards and square feet were mixed up. Miller advised Small’s to bid both ways. Small’s bid $71,348.72 for a two inch overlay consisting of tack and T-1 asphalt concrete. The company bid $62,511.24 for motor pave. The Shelly Company’s only bid was $68,967.50 for the two inch overlay of tack and T-1 asphalt.

Miller suggested trustees look over the bids between now and the next meeting. Trustee President Ron Acord and Cooper agreed.

Trustees also unanimously agreed to put a one-mill fiveyear fire replacement levy on the November ballot. That levy is currently being collected at .899657 mill for residential and agricultural property owners. If voters approve it as a replacement, the tax rate will return to its original one mill. Collection at the higher rate would begin in 2009.

Cooper noted that trustees failed to act as required within 30 days on a Zoning Commission recommendation made on June 13. He said zoning officials are working with county planner Brad Mercer and Edwards to develop a zoning process checklist to avoid such mistakes in the future. “It will really lock in a good process,” Cooper explained.

Trustees received a letter of resignation from Troy Dunlap. He is leaving the Zoning Commission, citing a lack of time due to career and family responsibilities. Cooper is contacting recently appointed alternate Denise Delagrange to see if she would like to move up.

Trustees next meeting is set for 7 p.m. on Monday, August 6 in the Licking Township Fire Company Station 3 on Ohio 13 just south of U.S. 40.