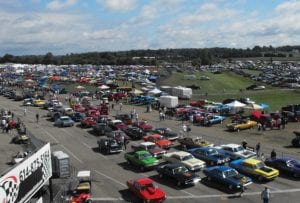 “I think Mopar fans are the most loyal of any brand, period,” said National Trail Raceway General manager Michael Fornataro, adding that fans race Mopars, tow with Dodge trucks, and even their motor homes often have Mopar engines.

“I think it’s because of the traditional ‘Big 3,’” he said. “Mopar was by far the most ‘out there’ in regard to styling, engine options, and marketing.” Fornataro said at one time the older Mopars were like the second-class citizens of the automotive world, but the incredible rise in their value is something of a vindication for the faithful. “Also, when there were lots of parts being reproduced for cars like Mustangs and Camaros there was nothing, and I mean nothing, available in the reproduction market for Mopars.” The community of Mopar enthusiasts became much more close-knit, as they were forced to work together to find the parts they needed. 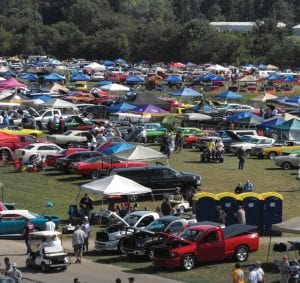 Enthusiasts will have plenty to see as National Trail welcomes nearly 3,000 Mopars competing in drag racing, burnout contests and Show & Shine. Hundreds of Mopars will be for sale along with every imaginable new or used part.

Celebrate the 36th Anniversary of the Nationals by test driving a new HEMI Dodge or experience the incredible acceleration of the Challenger Hellcat thrill ride with a professional driver, free! Celebrate the 50th anniversary tribute to the Dodge Charger.

Outside of the raceway grounds, enjoy even more Mopar fun with the Route 79 Supercruise, beginning at 6 p.m. on Saturday, Aug. 13, to watch all the cars cruise! The event begins at Tri- County Chrysler Superstore, with stops at RCD Sales Co., Coughlin Toyota, and the Buckeye Lake Historical Society, and ends at Buckeye Lake / Columbus East KOA.