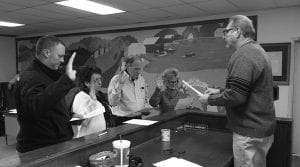 Ohio law allows a municipality to impose a maximum one percent income tax without seeking approval from voters. Now the Village of Rushville is the only municipality in Fairfield County without an income tax.

“Our hands are tied if we don’t get this one percent,” Matheny explained. “We need it to go ahead and get some stuff done. Lots of grants are matching funds and you can’t match ‘nothing…’ If we, as a village, want to move ahead we need this.”

Central Ohio’s Regional Income Tax Agency (RITA) previously estimated the new tax would generate $330,000 a year and cost $13,000 – $15,000 a year to administer and collect. RITA will handle administration. The new tax will only be assessed on earned income, not on retirement income or Social Security. It will be effective July 1. Fiscal officer Susan Ramsey said the village won’t see any income tax revenue until September-October and it will likely take three years to achieve full collection.

Council members went into executive or closed session after nearly two and a half hours to discuss the employment of a public employee. When they returned, they replaced the elected Board of Public Affairs (BPA) that manages the village’s water and sewer operations with a part-time village administrator. That decision leaves the Village of Sugar Grove as the only Fairfield County municipality with a Board of Public Affairs.

Matheny told The Beacon that he had planned to appoint both Reasoner and Stought to the BPA at its Monday night meeting. That plan derailed when Carpenter resigned effective Jan. 18. He wrote, “Over the past few days, it has come to me that I can no longer serve on the BOPA for the Village of Millersport. Just once too often, the thought of not continuing has come into my thought process and I feel it is time to quietly step away.” Matheny said, “He (Carpenter) has done a fantastic job since he’s been here.”

Without Carpenter, the BPA could not convene a meeting Monday night. Matheny said after consulting with the village solicitor, he decided to present the options to council members the following night. The options were to reconstitute the BPA by appointment or replace it with a village administrator. Council members opted for a part-time administrator and appointed Vince Popo to the post. He has been assistant fiscal officer and most recently been the part-time mayor’s assistant. Popo has agreed to take on the additional duties at no increase in pay.

In other business, Matheny administered the oath of office to four council members. Beth Warner was elected to a four-year term in November after being appointed to fill the last several months of Thomas Middleton’s term. Dustin Bidwell, who decided to run for mayor rather than council, was appointed to fill the remaining two years of Matheny’s council term. James McKittrick and Linda Willison were elected as write-in candidates to four-year terms in November.

Matheny opened the meeting with a warning that he’s “going to be pretty aggressive” about getting a lot of things done. He said over the years there has been a lot of talk about many projects but little has actually been accomplished. He added that council members will “need to agree to disagree” at times and asked everyone to be respectful.

After months of discussion, council members approved an increase in water and sewer rates by a 5-1 vote. McKittrick voted “no,” explaining, “This is a hard one for me…Right now at this time I’m against it.”

The water base rate for the first 3,000 gallons per month is unchanged. Water Superintendent John Wood said customers using the minimum or less like elderly or single couples typically won’t see an increase. The cost of each additional 1,000 gallons per month will increase $0.75 from $4.79 to $5.54. The cost of the bulk water sold to the Village of Buckeye Lake will also increase from $4.79 to $5.54 per 1,000 gallons. Buckeye Lake was notified of the rate increase last September.

Wood said the increase is needed to fix the water treatment plant’s iron filter, repair or replace the downtown water tower, upgrade wells #3 and #4 so they can serve as backups and replace an outof date hydrant.

Wastewater Superintendent Josh Lutz said the department will have an operating deficit in six or seven years. Upgrades to the treatment plant are expected to cost $1.2 million plus $50,000 to $60,000 annually for capital improvements from 2020 to 2025. “As long as we maintain a steady increase, we won’t have a big increase,” Lutz explained.

Andrew Kimble with Kimble Companies attended the meeting. He addressed the recent 25 missed stops. Kimble said, “Customer service reps were wrong.” There should have been a “24-hour turn-around” to correct the problems. “Customer service was wrong saying that we will be back next week.”

Matheny told Kimble, “People are upset that their bills are not being adjusted. If we’re going to keep your service, you’ll need to do that.” He later added, “I’m going to be straight up. We’re on the last leg. We’re going to look into what we could do about it. I don’t think the customer service has been good since we started.”

There was considerable discussion about Matheny’s decision to hire Alex Foltz at $10 per hour for office support. Council members questioned why he was the only applicant interviewed and asked why a Millersport resident didn’t get the job. Several called the hire “sneaky.” Matheny explained that it was an administrative hire and that there is no requirement to interview all applicants. He said Foltz has financial experience after working at Commodore Bank for more than a year. He will also be a resource as the village gets more involved in recreation. Foltz is a junior high coach at Millersport High School. His appointment was approved by a 5-1 vote, with Warner dissenting.

Council’s next regular meeting is scheduled for 7 p.m. on Tuesday, Feb. 9, at village hall.