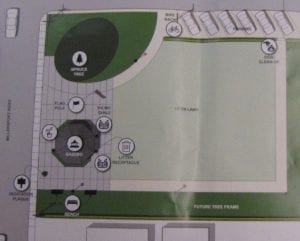 REALM Collaborative of Columbus presented several renderings for the village’s proposed streetscape project at the May 9 Village Council meeting. Above is the outline of the 0.4 acre park on the former Sohio service station site on Millersport Road. The orientation is Millersport Road on the left with Gift Street on the top and Fire House Alley on the right. Above right is the gazebo that will anchor the southwestern corner of the lot. Renderings courtesy of REALM Collaborative.

MILLERSPORT – Residents were invited to come to the May 10 Village Council meeting an hour early.

Last year’s state capital budget included a $250,000 allocation to be split between the Villages of Buckeye Lake and Millersport for streetscape improvements The intent was to help both villages cope with the effects of the Buckeye Lake dam replacement.

Millersport officials have been working on their project for more than six months. Buckeye Lake has only mentioned their grant in passing.

Grant coordinator Jessica De- Long of the Ohio Public Facilities Commission attended the early session and most of the council meeting to answer procedural questions about the grant and provide a pre-submittal project review.

Brian Bernstein, an urban designer and landscape architect with REALM Coolaborative of Columbus, presented the final design concept to village officials and DeLong.

The grant requires a 50 percent match and DeLong described what local contributions counted. She had some good news on the prevailing wage requirements. This project which is based on the construction of a gazebo on the former Sohio service station site on Lancaster Street is considered a new build and the prevailing wage only applies if the project costs more than $250,000. She also said there are no specific bidding requirements though village officials plan to get multiple bids.

DeLong hopes to get Millersport’s funds released at one of he two State Controlling Board meetings in July.