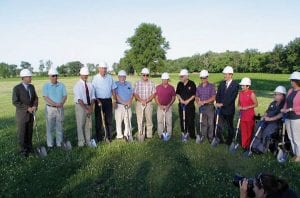 BALTIMORE – Finally it is time to celebrate.

Superintendent Paul Mathews said a new middle school was just an idea in 2001. He credited former Superintendent John Schiller with getting it going. When Schiller learned that the Ohio School Facilities Commission was starting an expedited program, Mathews said Schiller waited outside the Commission’s door on the first day. “We had the first application for the expedited program,” he added. Mathews and board members invited Schiller to the ceremony.

“Congratulations, Liberty Union,” he told the crowd. “Let’s get that school up.”

It took voter approval of two levies plus a 60 percent match from the OSFC to pull off the district’s rebuilding program that will give the district an almost brand new elementary school, a new middle school and a completely remodeled high school. “We couldn’t have done this without a state match,” Mathews explained. District taxpayers are paying 40 percent of the cost, while the State of Ohio is responsible for 60 percent. That state aid seemed elusive for several years. 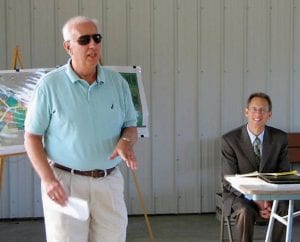 Twice as the district got close to its turn on the expedited list, the list would be recalculated, pushing the district back down. OSFC Executive Director Mike Shoemaker told a story about ordering a hamburger with everything in a restaurant only to discover that he got all the extras, but no meat. “The beef is here now,” he proclaimed. “We were able to freeze that list so you didn’t move anymore.” Shoemaker added that investments in education are even more important now.

Mathews recognized everyone individually in the crowd. Fairfield County Commissioners Mike Kiger and Judy Shupe were thanked for their support as was Fairfield County Sheriff Dave Phalen. Mathews said State Sen. Tim Schaffer and State Representative Gerald Stebelton planned to attend, but were detained in Columbus as the legislature worked out a budget agreement. 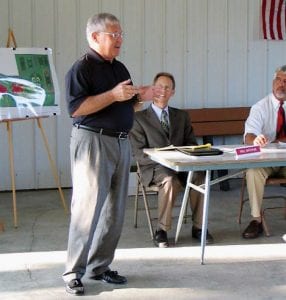 Mathews thanked Baltimore Mayor Bob Kalish and Village Administrator Marsha Hall for their help. He thanked Police Chief Michael Tussey for his help in securing a school resource officer for the high school for the new school year. “It’s just not the school district, it’s the village as well,” Mathews said.

Construction manager Smoot Company was represented, joined by several representatives from Feinknopf Macioce Schappa Architects. Mathews said Baltimore resident and lead architect Joe Schappa “has been helping this district for more years than I can count.”

The Baltimore Lions and Rotary clubs were represented as was the Chamber of Commerce. Administrators, teachers, levy campaign chairs and parents also participated in the ceremony. “We’re not quitting until everybody who wants to has an opportunity with a shovel,” Mathews declared. 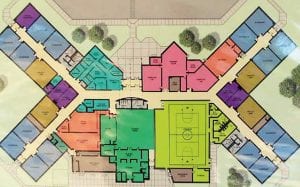 In other board business after the ceremony, members accepted Jennifer Hughes’ resignation as middle school intervention specialist. The following supplemental positions were approved:

• Tom Basso and Will Norris as high school football volunteers;

District officials are anxiously waiting to open bids for site preparation work for the new middle school. Bids are due at 11 a.m. Thursday, July 16 and will be immediately taken to the elementary school library and publicly opened. A dozen firms purchased the plans and attended a pre-bid conference so officials are expecting strong competition. Board members set a special meeting for 5 p.m. on Wednesday, July 22 in the high school library to award the site preparation contract.

The board’s next regular meeting is set for 7 p.m. on Monday, August 10 in the high school library.