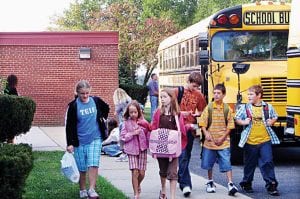 MILLERSPORT – The first day of school for Millersport Elementary students could’ve just as easily been the one hundredth. Calmly and cheerily children filed from the buses and through the school’s open doors with no sign of the apprehension one may expect from students returning to classes after a long, hot summer.

Transportation Manager Mike Washburn wasn’t surprised the buses weren’t filled to capacity. He said that generally parents will drive their children to the first several days of school, but the buses will slowly fill as the weeks progress.

Millersport police officer Keith Lewis said he’s more concerned about the adults than the children. Over summer, drivers become accustomed to school zones being devoid of students. “It’s hard to get them slowed down the first day or two,” he said. Lewis tries to issue warnings to speedy drivers whenever possible as they become used to the flashing school zone lights, but issuing some tickets is inevitable. He warns drivers that traveling 35 miles per hour or faster in a school zone earns motorists a mandatory appearance in court. Lewis said he once stopped someone driving 65 miles per hour in a school zone. “I got him with a reckless (operation), too,” he said, “and it stuck.” 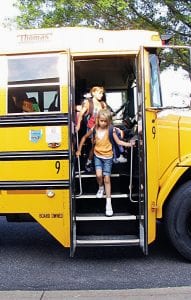 Fortunately, Wednesday there was no recklessness on anyone’s part as drivers, pedestrians, students, and parents worked together for an easy-going Millersport morning. 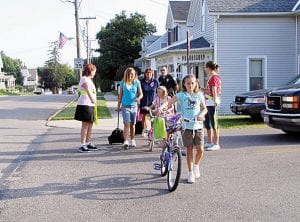