Upp explained that the county had been unable to come to an agreement with ODNR concerning the extent of road repairs needed to repair the damage caused by the dam replacement construction traffic. The county and the township had executed a Road Maintenance Agreement before construction started to cover any damage to Lieb’s Island Road, Millersport Road and Seller’s Drive. But months of negotiations, including consulting with ODOT as outlined in the RMA, failed to reach an agreement on the extent of repairs necessary to return the three roads to their pre-dam construction condition. The dispute then went to a mediator.

Upp and Brown-Thompson told trustees that it took an all-day mediation session on May 6 to reach a satisfactory settlement. Though ownership of Lieb’s Island Road isn’t perfectly clear, maintenance responsibility has generally fallen on the township. Upp said the settlement agreement will provide $175,000 to mill down the existing asphalt on Lieb’s Island Road and add three to four inches of new asphalt. Some areas may require full depth reclamation which includes redoing the base. The settlement includes $220,000 to resurface Millersport Road and $55,000 for Seller’s Point Drive. The total settlement amount is $350,000.

Trustees unanimously approved the settlement. Upp said the settlement was a significant accomplishment considering where ODNR started. The county engineer’s office will handle the design and bidding process for all three roads.

Trustees thanked Upp and Brown-Thompson. “It’s been a long road,” Trustee Doug Leith said.  “I don’t know where we would have been without you.” Road supervisor Tim Morris echoed Leith, thanking Upp for his office’s exceptional help on all of the township’s road projects.

In other business May 7, Dick Miller, field operations manager for Ohio’s Multi-Agency Radio Communication System (MARCS), was present to discuss the 350 foot, self-supporting tower that will be built near the township complex. The new tower will significantly improve the ability of area law enforcement and fire/EMS personnel to communicate among themselves and with other agencies even within buildings. Emergency radio communication has been spotty in northern Fairfield County, particularly in the Baltimore area. The improved communications  will extend into Licking and Perry counties.

Fairfield County is buying an eight-channel system for the new tower for about $250,000 with the state-wide MARCS system picking up the rest of the more than one million dollar cost for the new tower. Walnut Township is providing a 75 foot square site and road access to it. The three-sided tower doesn’t have guy wires, but will be enclosed by a six-foot high chain link fence.

In addition to the improved emergency communications, Walnut Township will share the tower’s backup generator, meaning the fuel center that serves local governments and the school district will now have backup power. The generator will be sized to power the entire township complex in the event of a power outage.

Miller told trustees that 1,800 agencies with 123,000 radios use the system state-wide. “We want to be a good neighbor,” Miller said. He expects construction will start late summer with the new tower on-line by the end of the year.

Millersport Fire Chief Rob Price strongly supports the project. Miller assured him that if local agencies start getting the radio equivalent of busy signals additional channels will be added.

In his report, Morris said road salt prices for next winter via ODOT’s contract went up another $3/ton to $83.95/ton after a big jump last year. He said the township’s two-person road crew, Morris and Mike King, have already used 1,000 gallons of emulsion and 50 – 60 tons of limestone with the Durapatcher this year

“We need to either put on a road levy or go to gravel roads,” Morris told trustees. He added that residents should be patient on pothole repairs since his small crew is focusing on some unexpected culvert repairs or replacements.

Morris said the county engineer’s office will draw up plans to redo Geiger Road in two phases. Plans are to apply in September 2020 for an Ohio Public Works Commission grant for the first phase.

Fiscal Officer Jane Baker told trustees they could allocate $250,000 for road repairs this year. The top priority is Lakeside Road where the plan is to follow Licking County’s successful experiment by first doing a single chip & seal layer then a 1.5 inch layer of asphalt. Ruffner Road will be chip sealed. Musser and Thoreau Lane may also be chip sealed depending on the estimated costs and actual bids.

Trustee Terry Horn said there’s nothing new nor any meetings scheduled on a possible multi-township effort to enact and enforce a property maintenance code.

Trustees also opened sealed bids to purchase the township’s JD CX15 bat-wing mower. The three bids ranged from $1,082 to $5,701. Trustees unanimously agreed to sell it to Cress Equipment for $5,701.

Trustees next regular meeting is set for 7 p.m. on Tuesday, June 4, at the township complex. 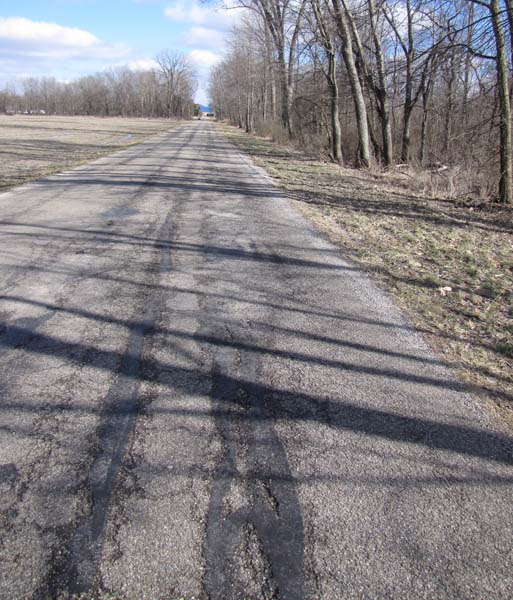