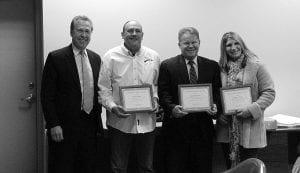 BUCKEYE LAKE – Mayor Rick Baker presented five Community Pride awards to six recipients Monday night. “Number one on my achievement list is trying to improve the village,” said Baker, whose term expires at the end of the year. He said he wanted to recognize those who helped achieve that goal and he hopes the mayors who succeed him continue to present the award.

Property investor Don Dick received an award for his efforts to improve the former Clark property block near the North Shore boat ramp that includes the Bangkok City restaurant and several other commercial properties. Baker said the village removed a couple of the derelict properties on the block, but “he’s taken care of the rest of them.” Dick removed several rundown properties from the block, which Baker said is far more orderly since his purchase. Baker isn’t sure what Dick has in mind for the property’s future, but Baker would like to see a hotel built with businesses on the ground floor.

Baker awarded Buckeye Lake realtor Judith Green for rehabbing her RE/MAX 360 office, which is a village cottage directly across Ohio 79 from the Donato’s restaurant. “I would like to thank the Village of Buckeye Lake and Mayor Richard Baker for this prestigious award,” said Green. “I’m very excited to contribute to the revitalization of Buckeye Lake and look forward to the many opportunities that the Buckeye Lake region has to offer.”

McAnally said previously that builders are focusing on residential construction for the time being. However, he does plan to create a commercial structure for some small retail businesses along Ohio 79. There are no longer plans for Newark restaurateur Eric Mason to build a waterfront restaurant and club, but McAnally would like to see a small restaurant locate in the proposed commercial space, along with, possibly, private offices or small retail stores. “Right now, we’re concentrating on residential,” he said.

Property investor Barry Wright received an award for his work rehabbing homes in the Carlin Addition, much of which he purchased from the Buckeye Lake Park Company. “He’s going to make that a nice development,” said Baker, adding that Wright has also taken steps to improve the streets in the Carlin Addition, which are privately owned. Baker said the village cannot maintain privately-owned streets. He said Wright has improved other homes in Buckeye Lake Village as well.

Baker said residents Bob and Ruby Sillin inspired the award. “I used to see him picking up trash,” said Baker. “He’s been doing it for 15 years.” Baker said the Sillins have voluntarily picked up trash regularly around the village and along the shoreline, simply because they believe it’s the right thing to do. “It goes unnoticed by a lot of people,” said Baker, who was pleased to recognize them for their efforts.

“I’m thrilled with (Carroll) taking my place,” said Baker. “He has his own mind. He’ll do a really good job.”

• Use formal titles- The council should refer to one another formally during public meetings as “mayor,” or “council member” followed by the individual’s last name.

• Practice civility and decorum in discussions and debate – Difficult questions, tough challenges to a particular point of view, and criticism of ideas and information are legitimate elements of a free democracy in action. This does not allow, however, council members to make belligerent personal, impertinent, slanderous, threatening, abusive, or disparaging comments. No shouting or physical actions that could be construed as threatening will be tolerated.

• Honor the role of the chair in maintaining order- It is the responsibility of the chair to keep the comments of the council members on track during public meetings. Council members should honor efforts of the chair to focus discussion on current agenda items. If there is disagreement about the agenda or the chair’s actions, those objections should be voiced politely and with reason, following procedures outlined in Roberts Rules of Order for Parliamentary Procedure.

The rules also outline how council members should interact with the public during meetings.

• Be fair and equitable in allocating public meeting time to individual speakers (during public comments, etc.)- The chair will determine and announce limits on speakers at the start of the public meeting process. Generally each speaker will be allocated two to three minutes. If many speakers are expected, the chair may shorten the allotted time or ask speakers to limit themselves to new information and points of view that previous speakers have not already covered. No speaker will be turned away unless he or she exhibits inappropriate behavior.

• Give the appearance of active listening it is disconcerting to speakers not to look at them while they are speaking. It’s fine to look down at document or make notes, but gazing down for long periods of time gives the appearance of disinterest.

• Ask for clarification, but avoid debate and argument with the public- Only the chair, not individual council members, may interrupt a speaker during presentation. However, a council member may ask the chair for a point of order or point of information if the speaker is off topic or exhibiting behavior or language the council member finds disturbing, or would like further information from the speaker.

• No personal attacks of any kind, under any circumstance- Council members should be aware their body language and tone of voice, as well as the words they use, could appear intimidating or aggressive.

• Director of Development Mike Cassidy said he heard a rumor that another bank would take over the PNC Bank building shortly after PNC vacates the building in February.

Council member Barry Herron said he believes PNC owns the building and will not allow another bank to use the building until three years after PNC leaves. “They’ve been there 23 years,” he said Herron said it will be a “detriment to the community” not to have a bank in the village.