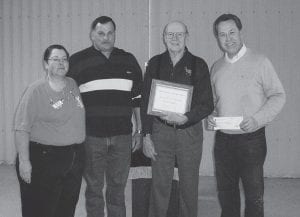 BUCKEYE LAKE – Mayor Rick Baker is trying to convince the Licking County Board of Health to reduce permit fees as village residents connect their homes to a new public water distribution system.

However, health department board members may have their own ideas. Some residents were shocked to learn recently that the health department is requiring permits and inspections for connections that could cost each household $75 in addition to other expenses. Baker said this fee is a combination of $60 and $15 permits; he’s tried to convince the board to reduce the $60 permit to $30 so the total is only $45. Baker said the board was ready to approve the measure during its last meeting, only to table it shortly before the vote.

“The board members worried they were setting a precedent,” said Baker. He said board members had concerns about lowering the fee for everyone in the village when many can clearly afford the fees. Also, if the price were slashed for Buckeye Lake, everyone else in the county would expect the same deal.

Baker said he would meet with health department representatives before the next board meeting set for 6:30 p.m. on Tuesday, April 20, 6:30 p.m.

In a related issue, Baker said Carlin Addition residents are willing to give their privately owned

In other council news:

• Council member Clay Carroll said Monday night that he will send a questionnaire to Buckeye Lake Fire Department members asking them how often they respond to Buckeye Lake’s audible siren, which can be heard village wide. Carroll is responding to complaints that the siren wails at all hours and is a nuisance, especially since most other Licking County municipalities use pagers/ radios exclusively.

• Baker said the village may receive $100,000 in grant money from Licking County toward rehabilitating houses, but as of Monday night’s council meeting he was unsure if it would be approved.

Licking County Community Development Specialist Beth Jones said Wednesday that the grant is competitive based upon how well applications score. “I’m trying to receive maximum ‘marketing strategy’ points in regard to marketing the program in the target area,” she said. Buckeye Lake is one of those “target areas,” with $100,000 of the total $500,000 grant earmarked specifically for Buckeye Lake. Licking County low to moderate income homeowners will be eligible for grant money, except for those who live in Newark or Pataskala, if Licking County receives the grant. The income limits are 80 percent of area median as determined by the federal government. The income limits are adjusted for family size, said Jones.

• Two houses on Ohio 360 were reimbursed $624 each-the amount each household paid toward water system pre-assessment charges. The houses are beyond the limits of Buckeye Lake’s public water distribution system and are served directly by Millersport. “Buckeye Lake will never serve them,” said Buckeye Lake Service Director Tim Matheny. “They shouldn’t have been charged.”

Police Chief Ron Small formally thanked the Eagles and VFW for their donations.

• The village hired Michelle Shumaker as treasurer. She replaces Pauline Ety, who is moving out of state. Shumaker is formerly Thurston Village’s village clerk.