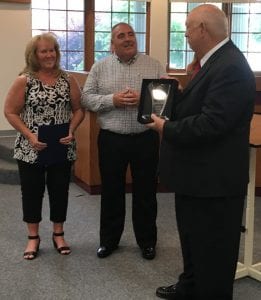 Hebron Mayor Mike McFarland presents a plaque to retired Hebron Fire Captain Rich Vance in honor of his 28 years of service to the village. McFarland also thanked Vance’s wife for her patience with his service. Courtesy photo.

First council members had to accept Fire Chief Jack Stickradt’s resignation effective July 10. The former Newark Fire Chief resigned June 4, writing that it was a “benchmark day” – the 40th anniversary of his start in the fire service. He became Hebron’s second full-time fire chief on Nov. 17, 2014, replacing Randy Weekly after he retired in July 2014, with 42 years of service with the department.

Mason is currently serving as Buckeye Lake’s interim fire chief and is expected to continue to head that department on a part-time basis. Mason become Hebron Fire Department’s third full-time employee in 1980. He noted to The Beacon lthat he will now be Hebron’s third full-time fire chief. Mason also expressed his gratitude to a number of Hebron firefighters including Denny Jacobs, Denny Davis, Randy Weekly, Marc Weekly, Dennie DeCarlo, Rich Moore, Donnard Myers, Kenny Nauer and Jack Stickradt for helping his development in the fire service and their long service to the Hebron community.

Mason has been retired for about five years, after serving as a full-time fire chief at Perry, Genoa and Madison townships in Delaware and Franklin counties. Mason is also a former president of the Ohio Fire Chiefs’Association.

In other business Wednesday evening, McFarland and council members honored retired Fire Captain Rich Vance and his wife. McFarland called Vance an “outstanding friend to Hebron” and presented him with a resolution and plaque for his 28 years of service to the Hebron Fire Department.

“What an honor to serve the Village of Hebron,” Vance responded. “It’s been a privilege. It’s not a job; it’s a family.”

Council members have 30 days to name replacements for Friend and Mason. If they fail to take action within 30 days, McFarland can make the appointments. Council members decided to accept letters of interest in the vacancies until 4 p.m. on Friday, July 13. Candidates for the terms running through December 31, 2021, must be a Hebron resident and a registered voter.

Fire Capt. Ryan Wyse, subbing for vacationing Chief Jack Stickradt, asked council members for guidance on the possible sale of a surplus 2007 medic. The village had a rejected the high bid of $3,100 at an earlier sale. Wyse said he had been contacted by the volunteer association providing fire and EMS service to the Village of Old Washington (a small village on US 40 in Guernsey County) about possibly purchasing the medic. The association’s recently restored medic was destroyed in an accident. They are expecting a $30,000 insurance settlement, leaving them with $15,000 after paying off a loan.

Wyse asked council members if he should continue possible purchase discussions with the association. Mason suggested contacting the manufacturer of the medic box to get a better estimate of its value. Council members agreed that he should continue to talk with them. Several commented that they would rather see the medic used for its original purpose than be converted to a work van.

Mason asked council members to support a Food Truck Parade and Festival set for Saturday, September 15. The Hebron Lions Club and Masonic Lodge are working together on the new festival. The parade will start at 10 a.m. and end up at Canal Park where the food trucks will set up. There will be a couple of music venues and activities for children. Everything will wrap up by 6 p.m., in time for the OSU footit ball away game with TCU at 8 p.m. Mason said alcohol will not be available. Council members unanimously agreed to supply portable toilets, electricity and police to escort the parade.

In his brief report, Hebron Village Administrator Ralph Wise reported that the U.S. Census Bureau for the seventh straight year in a row is estimating that Hebron’s population increased as of July 1, 2017. Population is now estimated at 2,435 residents, up 23 in the last year. He also reported that the village’s Planning and Zoning Board has been asked to comment on the one, $63,000 proposal received to write the village’s zoning and subdivision regulations.

McFarland reported that he will be making brief comments at THK’s 20th Anniversary Celebration on June 29.

Council is on its summer schedule, so its next regular meeting is set for 6:30 p.m. on Wednesday, July 25. A special meeting will likely be set to appoint the new members.