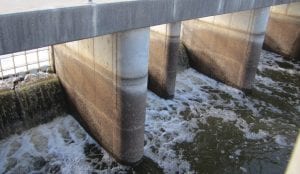 Looking ahead to a 2017 boating season? Recent rainwater was rushing out the AMIL spillway in Buckeye Lake Village Wednesday morning. Was the distinctive roar the sound of another lost recreation season? Since the stop bars were removed in October, the lake didn’t exceed ODNR’s new ‘winter pool’ (888.50) until Dec. 17. It had dropped as much as five inches lower. The lake peaked Wednesday morning at 889.27 – almost nine inches above the new ‘winter pool,’ but was heading back down to 888.50. The scale below indicates that the current level is about two feet, nine inches below normal summer pool. The drop back to 888.50 would put it about three feet, six inches below normal summer pool. ODNR confirmed Wednesday that the stop bars won’t be installed until March 1, meaning March and April snow melt and rains will have to add at least two feet, six inches to reach the interim summer pool. That’s a lot of water but anything less means a third lost recreation season. Beacon photos by Charles Prince.

BUCKEYE LAKE AREA – We predicated in last year’s Looking Back story that the “Dam Story” would retain its top story status for several years.

It has, but not in the manner we expected. It’s been a study of contrasts. For the first six months of the year, residents and visitors couldn’t escape the construction activity. Thousands of dump trucks roared into Buckeye Lake Village and Lieb’s Island. Construction activity was almost non-stop, continuing for 20 hours a day, six days a week and sometimes seven days. Damside residents often found sleep difficult due to equipment noise and the bright lights illuminating the dark winter nights.

As the project focus shifted from building the 4.1 mile long berm to constructing the 40- some foot deep seepage barrier, residents started sleeping better but found themselves facing nearly daily dust storms from construction traffic and activity on the berm. Some of the residents unlucky enough to live near one of the two bulk cement storage facilities had to contend with hazardous emissions of portland cement. 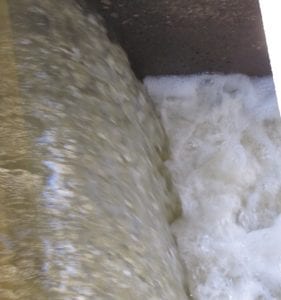 ODNR and its contractors beat their June 1 goal to complete Phase 1 by about a week. The stop bars were placed in the AMIL Spillway on May 26 with the lake nearly four inches above the new ‘winter pool.” That started the wait for more water for at least a partial recreation season.

Between Memorial Day and Labor Day – the typical summer season – the lake peaked at 889.15, a measly 7.8 inches above ‘winter pool.’ That was far short of the hoped for two foot increase to ODNR’s interim summer pool and much too shallow for any significant boating . During that same period, thanks to evaporation the lake fell as low as a half inch below ‘winter pool.’

Construction activity activity dropped sharply after May 26 with just a couple of soil mixing crews reworking some portions of the seepage barrier. By mid-July activity had dropped down to handful of workers mowing grass and removing anything left on the old dam.

By the end of summer, the project looked like it had been abandoned. That’s how it looks now. The construction trailers at Lieb’s Island are virtually used. ODNR claims off-site engineers are completing the Phase 2 design with work to resume this spring. None of the design details have been shared with residents or local officials. Dock designs and locations are still undetermined.

Long time lake observers are concerned that the lake level will again fall too short for a recreation season if ODNR sticks to its plan to wait until March 1 to install the stop bars at the AMIL spillway. Even if the interim summer pool is reached, it will be too shallow for any boating on the east end of the lake.

Businesses and residents are anxiously waiting for some assurance from ODNR that achieving the interim summer pool is a top priority. 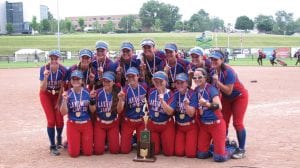 Though it turned out to be a very disappointing year for the dam project given the millions spent in overtime to reach a meaningless goal in terms of salvaging part of the recreation season, there were positive developments during the year.

The “feel good” story of the year was the Lakewood Lady Lancers softball team rebounding from a heart-breaking 2-1 loss to Granville in the 2015 state final. The Lancers came into the final with a 32-1 record including two regular season victories over Granville.

‘Rebound’ doesn’t really describe the Lancers ’ 2016 season. They dominated, winning every game. “After we were 20 -0, I told the girls you might as well win them all,” coach Criss Nadolson revealed after the Lancers 7-4 victory over LaGrange Keystone for the Division II State Championship. “It wasn’t easy.”

While ODNR’s secrecy and refusal to directly engage frustrated residents and local officials for the second year in a row, a grassroots organization now known as Buckeye Lake 2030 invited everyone to a six-hour plus visioning session at Lakewood High School last January.

Nearly 300 Buckeye Lake area residents and local political leaders turned out to discuss what they wanted a future Buckeye Lake to look like. The effort was organized by Central Ohio’s preeminent developer, Yaromir Steiner, CEO of Steiner + Associates. The developer of Easton Town Center organized the effort under the auspices of the Columbus Chapter of Urban Land Institute. Steiner has a weekend home at Compass Point.

He explained, “I’m here for community service…What do we want as a community?” Change is going to happen whether we like it or not, he added. Steiner explained Buckeye Lake is going to need money from the state beyond just the dam project. “We can’t pitch 10 different ideas to 10 different groups,” he said. There are years of work ahead, Steiner added. “We are working for our children and grandchildren.”

Activity continued through out the year. Buckeye Lake 2030 now has a handful of task forces, a locally raised budget, a new logo and a soon-to-be completed website. An update session including task force reports is set for 9:00 to 10:30 a.m. on Saturday, January 21, at Lakewood High School. Everyone is invited.

Other important stories in 2016 included:

Buckeye Lake Museum Director J-me Braig had a feeling when dam construction crews began digging around the former Buckeye Lake Amusement Park grounds they’d find something interesting, maybe even the legendary Black Diamond coal freighter that sank in 1850. The boat was hauling roughly 60-tons of coal from Newark to Thornport when its hull became caught on a stump and the boat capsized. Its four-person crew escaped the Black Diamond before it sank.

ODNR and Lawhon & Associates, Inc. of Columbus studied the wreckage and confirmed its identity as the legendary Black Diamond.

Dr. Ronald and Cindy Downing of Malta, Ohio, donated the Elizabeth Ann sternwheeler to the Buckeye Lake Historical Society. Ronald Downing built the 40-ton, 88-foot Elizabeth Ann in 1992 with the help of friends and family to be a pleasure boat that traveled the Muskingum River between Zanesville and Marietta.

Extensive renovations over the next two years will turn the Elizabeth Ann into the Queen of the Lake III, when it will become a dinner cruise-themed boat, with facilities for corporate meetings, family outings, motor coach tours, public tours, and dinner theater. The sternwheeler is now dry docked at the Buckeye Lake Yacht Club boatyard where it will remain until renovations are completed sometime in spring 2018.

Stein has a Master’s Degree from The Ohio State University in Educational Administration as well as a Master of Arts in Social Studies Education. She received her Bachelor of Arts from Ohio University in American and Urban Politics and Political Communication.

Challenger Ben Carpenter defeated two-term incumbent Commissioner Ed Keister 8,566 votes to 5,799 Nov. 8. He said his goal is for the commissioners to be more “visible” in the community and listen to Perry County residents’ concerns.

Carpenter said some of those concerns include providing water to areas of Southern Perry County and lack of county jail space. He said he would like more public meetings as a commissioner and he plans to do what he can to attract businesses in to the county.

In April, the Buckeye Lake Task Force, comprised of business leaders and elected officials that represent all three counties surrounding the lake, appointed retired banker Cheryl Krouse as Buckeye Lake’s recovery coordinator. Krouse’s position was created to orchestrate a suite of programs, coordinate service, and procure additional consultants to assist residents and Buckeye Lake Area businesses that stand to be severely impacted by the low water levels of the lake. Krouse said her primary role was to mentor and consult with lake area businesses to make adjustments to their business plans, find expense savings, and search for sources of funding. Krouse provided information and assistance with applications for the grants/loans program recently implemented under the Lakes in Distress Program the state legislature created in 2015.

July 29, Krouse resigned from the position, which has since been divided between Somerset Mayor Tom Johnson and several others.

Mansfield told council she listens to the recordings of the mayor’s court sessions and in June she reported in a letter that she could not listen to the tapes in her car with her grandchildren present due to Berryhill’s foul language. His liberal use of the “F-Bomb” during a formal proceeding shocked her. She said Berryhill told the court the “FBomb” is a “legal term” he uses, such as “Shut the f— up,” or, “Get the f— out.”

Thanks to voters’ approval of an additional three-mill fire levy on Nov. 8, Thorn Township Fire Department will be able to have on-station staff 24/7. Up to now,, the department had to rely strictly on volunteers or mutual aid from neighboring departments if volunteers weren’t available from 8 p.m. to 8 a.m. daily.