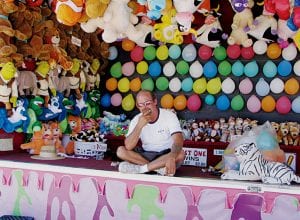 NEW LEXINGTON- Sun up to sun down would be short day for Joe Henry, who sits on the counter of his stuffed animal booth at the Perry County Fair, waiting for the midway to fillwith patrons. Hours before noon, the sun is already beating down mercilessly the first morning of the fair. “A lot of time, there ain’t no shade,” he said. Henry is part of the third generation of his family to own fair booths. “I was raised in the business,” he said. Henry and his booth travel to fairs and events all over Ohio from early spring to late autumn. During the winter, he builds fences right through the coldest months of the year. “I can’t stand being inside.” His summer days are long, often 12 to 14 hours every day. “It ain’t all bad, though,” he said. “You meet a lot of people.”

Jeremy Garn can relate. As manager of the Sandwich Masters booth, he starts chopping onions and green peppers at seven in the morning and grills sandwich steaks until midnight. He’s worked a Sandwich Masters booth at fairs and special events for 20 years and has no problem dealing with the heat above the grills, even on a scorching day like Monday’s. “You get used to it,” he said. Garn worked his first booth years ago, when he was also working as a swim coach for Ashland University. Now during the winter, he’s security supervisor for the I/X Center in Cleveland. It’s not an easy life, but he’s not ready to change it any time soon. When asked if he’d like to manage a Sandwich Masters booth for another 20 years, he said, “Well, maybe another ten!” 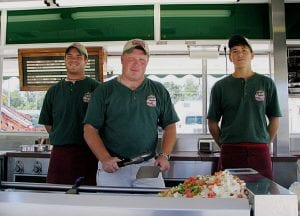 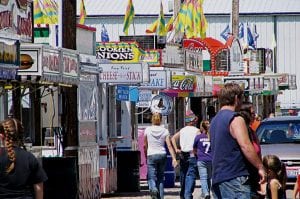